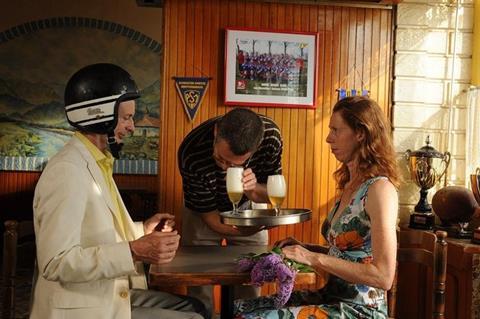 In their third feature, gifted physical comedians Abel, Gordon and Romy gracefully build on their distinctive brand of burlesque humour. They have also been building an audience base, and The Fairy (La Fee) - which opened Director’s Fortnight - is unlikely to buckle that trend with its Chaplain-esque interludes set in an off-kilter, colour-drenched Le Havre.

A particularly memorable moment comes when one of the Les Dieselles rugby players (Lemarchand) performs a knockout version of the Kurt Weil song Youkali.

Theirs is an old-fashioned, almost silent, routine (their first feature L’Iceberg was virtually wordless) blended beautifully with an arresting dance element. With their angular, exaggerated features, Brussels-based Gordon, Abel and Romy are akin to a circus clown troupe, vaudevillians who sprinkle the big screen with their art and unique aesthetic. The Fairy is not for everyone, but most people who try it should like it.

As with 2008’s Rumba, Gordon and Abel play Fiona and Dom. This time, they haven’t met yet. He’s a night porter at a run-down hotel; she’s a self-proclaimed fairy in a dirty tracksuit who rescues him from choking on a ketchup top in some particularly broad comic scenes. An Englishman (Martz) also checks into the same hotel with a dog hidden in his bag.

The Fairy soon ups the ante, with Fiona stealing some clothes and shoes from local shops for her date with Dom; the first of the film’s many amusing fixed-camera chases with the police ensues. Eventually they meet at the Love Is Blurred bar (L’Amour Flou), where they encounter its almost-blind manager (Romy). They fall in love, of course, in a dance sequence set underwater; the effects are worthy of a bathtub, but the performance itself is mesmerising.

By this time, the audience is completely on-side, and when Fiona becomes pregnant their antics scale up a notch further, culminating in a sequence worthy of the best of Tati or Keaton with a bar full of female rugby players and a mad dash after a baby stuck on the bonnet of a car which is being driven by a blind man with three illegal aliens in the boot. Only in Le Havre.

Rumba, which played out in the Quinzaine, notched over 100,000 admissions in France and sold to the US (Koch-Lorber). Now opening Director’s Fortnight, Gordon, Abel and Remy have slightly widened their scope but retained the unique elements which make them so special. While Dinah Washington’s What A Difference A Day Makes studs the piece, a particularly memorable moment comes when one of the Les Dieselles rugby players (Lemarchand) performs a knockout version of the Kurt Weil song Youkali.