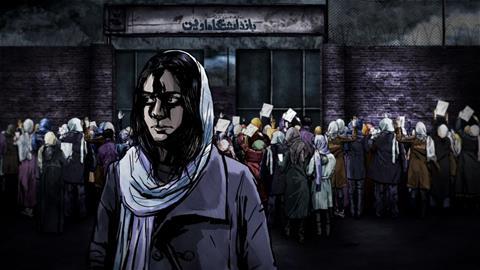 The Green Wave is a powerful and artfully constructed documentary that blends animation and interviews with tweets and blogs as it seeks to reconstruct the events around the May 2009 Green Revolution which saw crowds of thousands strong – most wearing green in some form – support and campaign for Iranian presidential candidate Mousavi.

When ballot papers ran out and polling stations suddenly closed, protestors took to the streets only to be brutally put down by the authorities. Footage from mobile phones and digital cameras blend impressively with the nicely drawn animation and the real-life stories are powerfully presented and movingly impressive.

An easy sell to broadcasters given its strong political stance and provocative structure, it could also appeal to theatrical distributors and other film festivals. The film screened at IDFA and will also show at Sundance.

With Mousavi put under house arrest and President Ahmadinejad the Green revolution peacefully protested under the slogan ‘Where Is My Vote’, though the brutal reprisals saw a young woman killed and many injured.

, with the young and passionate voices veering from hopeful enthusiasm through to horror and sadness of the realisation of the futility of the protest becomes more and more clear.

One student talks about how he ended up sharing a bleak and dark cell with some 200 prisoners, many wounded and some who died, while another recalls the day she was released, saying: “I left a small prison only to enter a much larger one – a prison called Iran.”