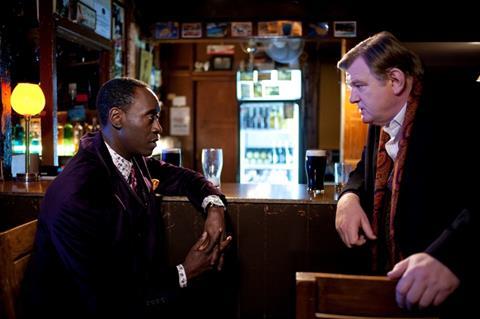 The portrait of a quirky rebel cop is at the core of an odd-couple buddy film in John Michael McDonagh’s debut feature, The Guard. As a flabby policeman with a mind of his own, Brendan Gleeson broadens his acting range, delightfully, once again in this black comedy which opened Sundance’s world dramatic cinema competition..

As a director, McDonagh avoids the grand gesture and focuses on his web of odd characters that call to mind the comedies of Preston Sturges.

The Guard will win over English-speaking audiences with its zinger lines from McDonagh’s script and deft casting in all the roles. Don Cheadle as Gleeson’s straight man from the FBI should help the film in the US market.  If subtitles could capture speed and scatology of the dialogue, the film could reach a public in Europe and Asia.

Gleeson plays Sergeant Gerry Boyle, whose caustic candor has cost him a few promotions. His mother is dying, and he hires prostitutes to dress up as railway conductors. His response to violence is a deadpan shrug, and he consumes the drugs that he finds in the pockets of crash corpses.

McDonagh’s script, like his hero, is devoid of sentimentality. Boyle thinks in crude racial stereotypes, which stymies his collaboration with the FBI agent (Cheadle) who is sent to track down drug smugglers.  “I thought that Black people couldn’t ski – or is that swimming?” he asks.

As a director, McDonagh avoids the grand gesture and focuses on his web of odd characters that call to mind the comedies of Preston Sturges – the straitlaced FBI man, cynical local cops on the take who outdo Boyle in cynicism, murderous philosophical drug dealers, and a young boy with a bicycle who turns up everywhere.

Gleeson is the Falstaff of this ensemble - a fashion victim (even when barely dressed); a bewildered dutiful son to his foulmouthed mother and a non-stop observer of human corruptibility, especially when there’s a dead body.

The sergeant also spouts cinema satire as the Dirty Harry /Popeye Doyle of Connemara battles crooked cops and Gleeson and Cheadle parody the formulaic buddy shtick of the Lethal Weapon films. The music of Calexico (not Irish fiddles and pipes) helps build the mock-heroic feel.

Besides Gleeson, the strength of The Guard is the wit of John Michael McDonagh (brother of Martin, who exec produced). You hear the laughlines in all his characters except Cheadle’s FBI agent, who carries too much boilerplate for a film that manages to get a rise out of so many familiar ingredients.

Cinematographer Larry Smith gives The Guard enough of the ruggedness and fog of the West of Ireland without turning it into a tourist brochure. As McDonagh makes clear, it’s the people who matter in this landscape.