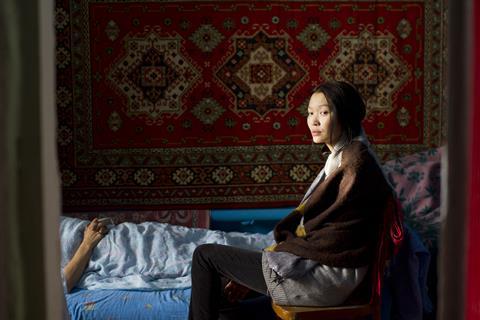 An attractively lensed but fairly bloodless portrait of hard-up existence with few options, Ella Manzheeva’s feature debut The Gulls (Chaiki) is set against the snowy, sparse expanses of the Republic of Kalmykia in Russia’s Volga region. While its themes of corruption and desperation in the country’s far reaches and yearning to escape to the city are well-trammelled in recent Russian cinema and its blend of folk legend, ethnography and mysticism not as evocative as a film such as Alexei Fedorchenko’s Silent Souls, its selling-point as a rare film from Kalmykia should see it well-served with festival slots if evading wider distribution.

As well as making the most of the natural landscape, the film is elegantly shot with frames that close off space using curtains and doorways – a technique that works to emphasise the protagonist’s confined state but at times feels stiffly composed and schematic.

Elza is the wife of a fisherman in a village by the Caspian Sea – the misty waterways of which are shot to seem as eerie and mysterious as they are picturesque. In voice-over she recalls the folk legend that a fisherman only returns if a woman is faithfully waiting for him, and that seagulls are the souls of the missing. It’s a heavily patriarchal world in which a woman’s role is defined in relation to the man she serves, enforced by such mythology and the close-knit web of attentive in-laws that uphold it.

Elza packs her case to leave while her husband’s out on the boat, but has second thoughts at the bus stop – a small and solitary waiting-bench against the vast, snow-covered expanse of the unknown. With an expressionless stoicism that gives away little of her inner world, she tends to her brusquely taciturn husband’s demands, serving food for him and his fishing buddies who press her to retire to her room while they drink vodka.

Aside from a rather incongruous scene that shows her as a classical piano teacher, her life offers little in personal fulfilment. Secretly smoking against her husband’s wishes and other rebellions show that she is still reluctant to accept a life so prescribed for herself. Evgeniya Mandzhieva, a successful fashion model from Kalmykia in her debut performance appears somewhat miscast and out of her depth as Elza. While understated reserve may be typical of the Kalmyk people, she fails to bring any inner fire or urgency to carry the film.  When her husband and his two companions disappear at sea, Elza is eyed suspiciously as a possible talisman of bad fortune by her relatives.

The film alternates between Russian and the Kalmyk language, and its role as ethnographic record was clearly considered an important one - understandable given that Stalin’s repressions left the language and culture under serious threat of extinction. As well as making the most of the natural landscape, the film is elegantly shot with frames that close off space using curtains and doorways – a technique that works to emphasise the protagonist’s confined state but at times feels stiffly composed and schematic.