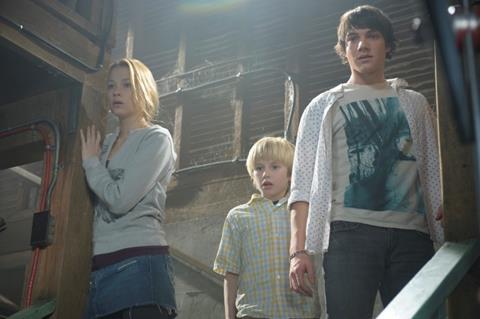 An anodyne 3-D young teen horror-thriller for the Twitter generation, Joe Dante’s first all-live-action feature in over ten years will be an interesting test case in just how much of an audience there is today for the sort of ‘family horror’ genre that Dante pretty much invented with Gremlins in 1984.

Though it’s a likeable story with a decent pop-psychology twist, the big dramatic problem with The Hole is the way its cute atmosphere and Disney-style teen bonding sessions and scary, thriller elements keep cancelling each other out.

Technically, the film’s 3-D effects push no boundaries but contain enough out-of-screen lunges to keep younger audiences happy – the film’s core market pretty much lies in the eleven to fourteen range. Older kids are likely to find this all too tame and airbrushed, though the 3-D carrot will extend the upward range a little and it could possibly work as a parentally-approved date movie.

Dane (Massoglia), who is 15, and his younger brother Lucas (Gamble) move out of the big city and into a classic, cliched American small town with their doctor mother Susan (Polo). Soon the warring siblings discover a mysterious trapdoor in the basement which leads to a dark pit that has no bottom and seems to unleash strange supernatural forces.

Cute but smart girl-next-door Julie (a convincing Bennett, first seen in Music & Lyrics) is let in on the secret, and Susan seems happy to leave her boys without a  minder during her long hospital shifts so that they can interact with scary jester puppets and wizened little girls who cry tears of blood.

The evolving plot takes quite literally the old chestnut about the hero needing to confront his inner demons and exorcise them. All three kids do this, but it’s only Dane’s fight against his own particular monster – after he disappears down the hole – that goes beyond seventies horror cliches (evil clowns, abandoned amusement parks) into more innovative territory.

Dante, his effects team and the art department make a reasonably convincing attempt to dramatise a teenager’s early childhood fears by playing with scale and creating an expressionist, Burton-esque homescape of distorted furniture and skewed lamps.

The best thing about The Hole is the light-hearted dynamic between the three leads, which feels closer to how kids are today than, say, Harry Potter  and his friends. But this also has its downside; rather than turning the tension down between fright scenes, the script releases it completely as these kids – who think that it’s ‘cool’ to have a gateway to hell in their basement – take time out for coffee breaks, video games and pool parties.

3-D effects include a baseball that whooshes up towards the audience, rusty nails falling down the hole towards us and some decent underwater pool sequences. It’s enough to justify the stereoscopic glasses – but there are few jump-in-your-seat fright sequences.