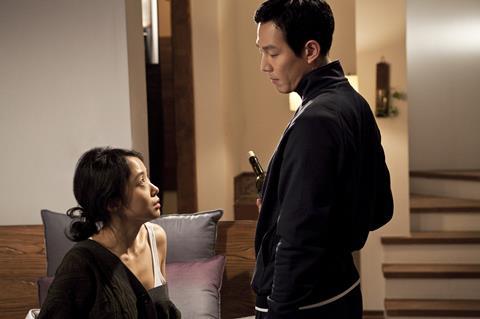 Outside of Korea, few will be playing the comparison game, so perhaps it matters little that Im Sang-soo’s glossy refurbishment has none of the scary weirdness of the original. But given the director’s obtrusive namechecking of Hitchcock prior to the film’s Cannes competition debut, a little more suspense would have been nice.

The most seductive thing about the film is the hyper-real ambience of the upscale Korean household it plays out in.

That said, this is a calculatedly commercial number that should do better than any of Im’s films to date, A Good Lawyer’s Wife included. In Korea, where the film was released on May 13 to coincide with its Cannes press screening, the continuing notoriety of Kim’s original and the recognisability of the cast (including veteran You Yuh-Jung, who starred in two of Kim’s post-Housemaid films in the early 1970s) should ensure a strong opening. Internationally, Pretty Pictures’ acquisition of the film for France (where it opens on September 15) should be the first of many bites for Mirovision.

It’s not Old Boy by a long, long chalk, but it’ll do for the Asian cult fans until something more substantial comes along.
Perhaps the most seductive thing about the film is the hyper-real ambience of the upscale Korean household it plays out in - the biggest and most expensive purpose-built set in Korean film history.

The mansion that belongs to wealthy businessman Hoon (Lee Jung-jae) and his pregnant trophy wife Hae-ra (Seo Woo) is a perfect simulacrum of the cultured consumer lifestyle, with its expensive valve amplifiers, scenographic techno-fireplace, carefully placed contemporary paintings and melodramatic-minimalist piano room. In fact, if there’s a true Hitchcock echo it’s here: as in North by Northwest, a spikily modern house becomes a menacing presence.

Jeon Do-youn, who picked up the Cannes Best Actress award in 2007 for her role in Secret Sunshine, plays Eun-yi, a naïve and childlike woman of uncertain background who is taken on as a junior housemaid by stern matron Byung-sik (Youn Yuh-Jung), a housekeeper to Hoon, Hae-ra and their eerily perfect and solemn little daughter Nami (Ahn Seo-hyun).
Eun-yi immediately hits it off with Nami but is treated more distantly by her posh bimbo mother, huge with twins, who spends much of her time flicking through coffee table books the size of coffee tables.

It’s not until this point, a good forty minutes in, that the film remembers that it’s supposed to be not so much a stylised study of power and servitude as a thriller. But despite some appetising performances, The Housemaid never builds anything like the tension of its fifty-year-old inspiration.

The problem is partly one of poise: the rhythms are just too measured, the crane shots, overhead shots and set pieces all a little too studied. If only some of the energy that had gone into getting the look right had been expended on the story: the ending, in particular, seems like a desperate afterthought. played for spectacle rather than dramatic truth.