The cast, crew and creative team behind hit UK TV series The Inbetweeners re-locate to Magaluf, Mallorca for the £3.5m budgeted-feature version, due to reach UK screens August 19. 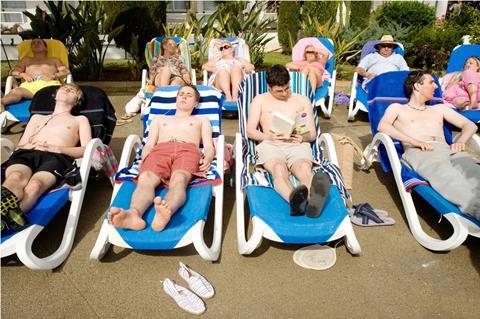 Synopsis: Four 18-year-olds from the south of England go on holiday to Malia in the hope of finding girls, cheap beer and sun. The film picks up where the award-winning E4 comedy-sitcom ended last year.

Next up: Despite persistent rumours of the same talent re-teaming for a fourth TV series or a one-hour special, nothing is in the pipeline, according to the producer and writers. Bird (who recently appeared on TV series Friday Night Dinner) and Thomas are scripting and due to star in Chickens, a WWII-era comedy pilot for Big Talk, which Steve Bendelack is attached to direct. Shooting is set for May.

Arriving on the set of The Inbetweeners Movie you would be forgiven for thinking you had stumbled into a Club 18-30 holiday bash. Despite it being low season in Magaluf, the pool-side is crowded with (fake) tanned bodies sporting fluorescent swimming costumes. In the corner of the scene, three pasty (and one not so pasty, for reasons to be revealed) boys are busy wisecracking and one-upping each other — a very different setting, but the same successful formula.

After three hugely popular award-winning series, which sold in over 20 international territories, it seemed a logical step for the writers of the UK TV comedy-sitcom The Inbetweeners to follow in the footsteps of previous UK TV hits Kevin & Perry and Ali G by transferring to the big screen. However, according to writers Iain Morris and Damon Beesley, the feature had been in their minds since the early days of the series. Morris says: “At the time we wrote the pilot we started to separate anecdotes we thought might make an interesting teen film. We were influenced by films like American Pie and Swingers – films which look at the way guys talk to each other. But then we filed it away. After the first series we were approached about writing a film and we returned to the idea of a lads holiday. By the third series we had written a rough draft.”

While plot details are hard to come by, Beesley provides a rough outline: “The basic journey is that four suburban guys go on this lads holiday abroad looking for girls, thinking that the sense of displacement they feel in suburbia — where they are in the outside looking in — will disappear when they go on holiday. But when they arrive that feeling is magnified by a million as there are some terrifying adults here. It’s about how they cope with that.”

Fans of the TV show will be wondering how much the creators have diverged from the tried and tested formula. “We’ve made it standalone. If you don’t know the series it will still make sense. There are a few new characters. Some new boys and girls. The boys meet a group of girls out here that they hang out with. They meet some oddball characters along the way, old guys who have been out here too long, and there’s some splitting up between the boys along the way. But its the same core. Carli [one of the character’s long-running love interest] is also here,” says Morris.

According to director Ben Palmer the main difference between the series and the feature is the expanded characterisation: “We touch on more of the boys’ friendship. In the series we would allow ourselves a little sentimentality in the final episode in each series, but in this film we get a little more depth and fleshing out of the characters. “

The six week-shoot includes one week in the UK and five in Magaluf, which is standing in for Malia, Greece. The winter timing of the shoot provides one of the biggest obstacles, as Palmer explained: “Trying to make a summer holiday look hot when it’s not was one of the biggest challenges. Trying to make it look oppressively hot when you’re shooting in Mallorca in the middle of February is not easy.”

Indeed, the weather played havoc the week before Screen’s visit in mid-March, when a scene on a party boat, involving 300 extras, was disrupted by black skies, high winds and large waves, which left quite a few people sick.

Despite that hiccup, producer Christopher Young is certainly one who feels more comfortable in this environment, with more experience in features than TV. In 2005 Young produced Annie Griffin’s critically accalimed and BAFTA-nominated Festival, but when he took The Inbetweeners Movie to Cannes last year he knew he had a hot commercial property: “When we took it to Cannes everyone wanted to do it; everyone gave me a meeting. I met all the big distributors, some of the biggest sales companies and studios. It was such a strong brand. The issue for us was how we could retain enough control to make the film like it is in the show. My biggest worry was to be just cashing in on the brand. For me the challenge in Cannes was to retain control and also to be in a position to open on 400 screens in UK. That is a very hard thing to do.”

After protracted negotiations, which saw the unusual outcome of FourDVD retaining UK DVD rights, the film was picked up for UK distribution by Entertainment Film Distributors. IM Global have more recently boarded for international sales.

And Young is now hopeful that the film can at least become the UK’s biggest film of the summer: “I would be disappointed if we didn’t hit double figures in the UK. The fanbase on Facebook alone is 2.5m people. And we hope to reach beyond that.”

Indeed, the public response bodes extremely well for The Inbetweeners Movie, which was E4’s most watched programme. The British tabloid press can’t get enough of the Mallorca shoot and neither can the fans of the series, with scenes at London’s Ministry Of Sound nightclub and in Magaluf drawing scores of followers eager to get close to the action.

Talking to the extras who had made their way from the UK to be on set in Spain, each had their favourite character. And when asked what it was about the series that appealed to them the answer was resoundingly similar: “They are hilarious. They’re always up to no good. The banter reminds me of my mates,” said one man in pink speedos.

The whole scenario reminded me once again of Club 18-30, whose motto is: “Nothing is sacred, if it’s going to be a good laugh then we’re in.”