The Law In These Parts 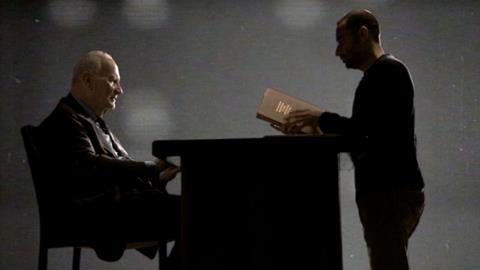 Crowned Best Documentary at this year’s Jerusalem Festival, this harsh indictment of the Israeli Law as implemented on the West Bank by the Israeli Defense Forces (IDF) through its legal department is bound to irritate the present Israeli regime no end, gain the full support of all its critics -  at home and abroad - but it is doubtful whether any one, on either side, will consider changing their opinions after seeing it.

Alexandrowicz points out the eternal fallacy of those who mistakenly believe law and justice are one and the same thing.

Alexandrowicz, a gifted documentarist (The Inner Tour) known for his left-wing liberal positions, has toiled a long time on putting together the testimonies of highly respected jurists on the way some of the more illegal and certainly unjust procedures adopted on the West Bank, got their blessing, their justification being that the law in these parts was supposed to serve not only justice but the system which it represented as well.

Though essentially a collection of talking heads with news footage from the occupied territories screened as a backdrop, The Law In These Parts (Shilton HaHok) will be a highly rated item not only for film festivals but for politically inclined events around the world.

The basic premise of the film is to explore the process through which the IDF, which started after the Six Days War in 1967 by considering the West Bank an occupied territory in legal terms, gradually introduced a vast and complex system of military orders and instructions, implemented as laws on a population that was neither an integral part of Israel not does it have any other clear legal status.

All of the professional lawyers and judges facing Alexandrowicz’s camera, drafted by the Army in the course of the last 40 years to serve on its courts of law, found themselves in an ambivalent, difficult ethical position, having more often than not to bend international laws by quoting the extraordinary conditions under which they were to be applied.

The persons brought before them during that period weren’t only transgressors of the law but also enemies of their people, who rejected the authority of the courts judging them. Despite their theoretical impartiality, these servants of the law were expected to close their eyes to crimes committed by Jewish settlers and send them to far more lenient civil instances, because those settlers were not suspected of being enemies of the state, while the Arab population facing military courts, most certainly was.

They were too often tolerant to accusations of brutal investigation tactics, since they believed these investigations were ultimately supposed to save Israeli lives from terrorist attacks. And once facing Alexandrowicz’s camera, they try to justify this conduct and their many cunningly worded verdicts, often resorting to awkward-sounding technicalities.

Alexandrowicz’s expertly edited piece confronts well-known and respected figures such as Meir Shamgar, an ex-President of the Supreme Court, with their decisions in the past, inviting them to consider such disturbing conclusions as the notion that the legal system served as a smoke screen behind which every law could be broken, or that had Israeli jurists stayed away from territories which were out of their jurisprudence anyway, the legal distortions that took place there would have become evident much earlier.

Both options are energetically rejected by the interviewees, who believe that even if they did not do an ideal job, it was the best in the given circumstances.  Beyond the unbearable evidence he brings up, which is never fully refuted, Alexandrowicz points out the eternal fallacy of those who mistakenly believe law and justice are one and the same thing. They aren’t and the distinction, in this case, is tragic.