The Legend Of Kaspar Hauser 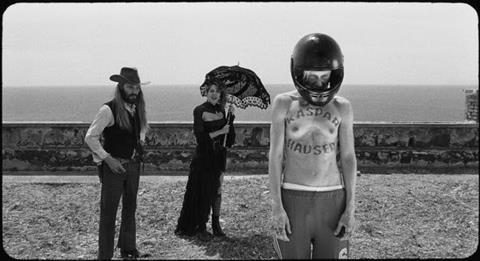 Beautifully shot in luminous black-and-white and willfully obtuse, Davide Manuli’s The Legend Of Kaspar Hauser (La leggenda di Kaspar Hauser) is littered with memorable images and moments of surreal humour, but despite an engagingly over-the-top Vincent Gallo it is likely just too inaccessible for mainstream audiences, though has just the right amount of quirkiness to appeal to festivals.

Gallo crops up in twin roles here – as The Sheriff (speaking English), a heavily-bearded rambling disco-loving peacekeeper and The Pusher (in Italian), dressed completely in white and driving around the dusty town on his motorcycle – and is the perfect fit – the film is essentially a series of chapters made up for long-takes with free-flowing largely improvised dialogue.

This Italian version of the oft-told legend of Kaspar Hauser – a mysterious boy who appeared in the streets of Nuremberg in 1828 and could hardly talk and his ancestry never explained – sets the story on a sandy island, where Kaspar (played by a bleach-blonde boyish Silvia Calderoni in a tracksuit and wearing headphones) washes up. The film, which had its world premiere at the Rotterdam Film Festival, shot on location in Sardinia.

The Duchess (Claudia Gerini), who rules the town and who feels threatened by the newcomer, sends The Pusher to tidy up loose ends. That, at least, is the basis of the story…but Manuli’s absurdist retelling is more about the stylish black-and-white images; Gallo’s rambling dialogue and the Euro disco soundtrack from Vitalic that is the heartbeat of the film.

Yes, The Legend Of Kaspar Hauser has disco, motorcycles, flying saucers (well, at least at the start and end of the film) and cult star Vincent Gallo in two roles. Art house at its artiest.