The Man from Nowhere (Ajeossi) 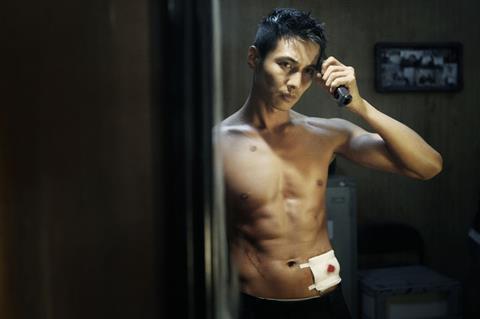 Star power is the driving force behind South Korean box office hit The Man from Nowhere. Won Bin in the lead role stands out as one of the most charismatic and gorgeous-looking Asian action heroes in recent memory, although the film itself leaves something to be desired.

Star Won Bin combines his sensitive-looking demeanor and graceful execution of his action scenes into an unusually charismatic screen persona.

The second feature by director Lee Jeong-beom (Cruel Winter Blues) has successfully targeted both male and female viewers in its native South Korea, topping the box office for the past three weeks for a $23 million total.

Internationally as well, The Man from Nowhere should rack up sales for investor CJ Entertainment, although some needlessly extreme violence, at times involving children, will pose a challenge for foreign distributors. In Asia particularly, the film would seem to have serious box office potential were it not for the wild card of these violent scenes.

Won plays a reclusive ex-secret agent whose only meaningful relationship in the world is a halting friendship with the 10-year-old girl next door (Kim Sae-ron, A Brand-New Life). When the girl’s addict mother makes off with a stash of drugs, thugs come knocking at the door, and he becomes the girl’s only hope for survival.

Won and Kim make for a touching pair, although their time onscreen together is limited and the seriously talented child actor Kim is somewhat underutilised in her role. But Won, who made his screen debut back in 2001, combines his sensitive-looking demeanor and graceful execution of his action scenes into an unusually charismatic screen persona.

Handsomely shot, the film as a whole shines in parts but sputters in others, let down by cartoonish villains and cheesy dialogue.