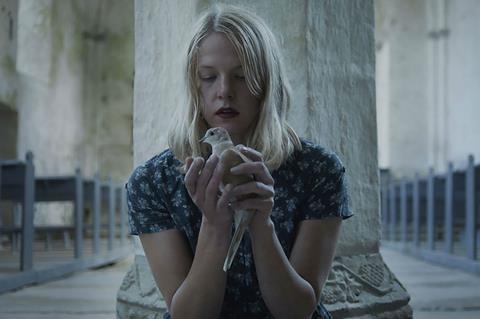 Two out of three chapters in this triptych of stories about Estonian womanhood are dazzling. The Manslayer wallows through mud and folklore in a slate-grey rural past in which a girl’s unwillingness to enter an arranged marriage is treated by assaulting her with smouldering herbs and spraying her in the face with chicken blood. The Virgin takes place in 1949, when a young woman faces a stark choice between a fake marriage and deportation to Siberia. The third chapter, however, is less coherent – a tonally jarring contemporary-set fable, The Shadow leans heavily on symbolism and mystical imagery, losing much of the striking rigor of the first two sections in the process.

The latest feature from Estonian director Sulev Keedus, this is undeniably accomplished filmmaking which should connect with audiences in the Baltic region and in further festival slots. However, the quality of the work notwithstanding, the marketing challenges caused by the difficult third chapter and the running time might prove too daunting to tempt distributors outside the region.

The main link between the three stories is actress Rea Lest, a rising star of Estonian cinema, who takes the central role in each story. In the first section, she plays Maara, a peasant girl wooed by a reckless suitor on a stolen pony, but promised in marriage to an older widower. Almost all of the colour has been leached out of the photography here, leaving clay-coloured complexions and a blighted winterscape of blasted earth and skeletal trees. Against this, the mutinous Maara is married off to a man who deducts three roubles and a cow from her dowry because he got wet on the way to the ceremony.

Her father gives the bleakest wedding speech of all time, pondering boozily about the way a daughter grows from being a delight as a child into a “complete stranger.” He adds, voice as hollow as an empty vodka bottle, “It is terrifying.” A music motif which sounds like a knife scraping against glass is carried through each of the stories but it feels particularly apposite here, in time in which violence simmers near the surface.

In the second story, Lest plays Elina, a Ingrian Finnish immigrant who works in a quarry. After a slick would-be seducer warns her of imminent deportations, Elina turns to her kindly boss. He suggests a fake marriage to his nephew Heino. Location choices are, again, impressively atmospheric – the paint on the walls of every building in Communist Estonia seems to be flaking off to reveal the rot beneath. And in Elina, Lest has the most dramatically active character of the three.

In contrast Luna Lee, the third role she tackles, is so passive that she fades into the background, drowned out by the showboating of a pair of warring actors and a monologuing priest. This third section is simply not as fully realised. The story, which involves a spot of impromptu performance art, a priest involved in some kind of Christian taxidermy enterprise and a solar eclipse, drops the baton carried so triumphantly through the first two sections and leaves the viewer adrift and unfulfilled.