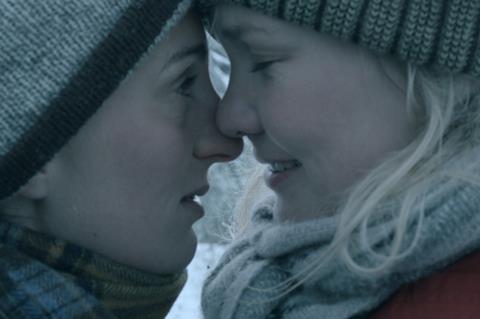 The kid isn’t alright in The Mountain (Fjellet), an intense Norwegian relationship drama about a lesbian couple who attempt to find some kind of closure by returning to the remote mountain where their young son died. Impressively directed, with beautifully composed figures-in-a-landscape photography and utterly authentic performances from the two leads, this is nevertheless a dramatically thin tale that struggles to fill out its barely feature-length running time.

Still long shots of the increasingly dark and forbidding mountain scenery alternate with extreme hand-held close-ups of the women’s faces as they argue.

On one level, the film is an intense and in many ways grueling chamber drama whose slow-burn pacing and one-note theme will challenge its audience’s patience. But it also aspires to something bigger and more commercial in its shades-of-Hollywood soundtrack and three-act march towards dramatic resolution. This strategy could just backfire, as the sort of cineastes who are up for feature-length grief in the cold north may be turned off by these little shoves of sentiment.

We first see Solveig (Petersen) and Nora (Solem) in the setting they will occupy throughout: walking in a desolately beautiful snow-dusted mountain landscape, rucksacks on their backs. There is clearly some tension between them, and the reasons for it are slowly dosed out in a series of revelations.
The couple are here, it becomes clear, because their five-year-old son Vetle - who is Nora’s biological child - fell to his death on this same mountain two years previously. Outwardly uncomplicated blonde Solveig has forced the trip on the reluctant Nora, a private, controlling soul who finds it difficult to talk about what happened, or indeed to talk about Vetle at all.

Resentment eddies between the two like the snowflakes that begin to fall ever more insistently as they climb towards their destination. They argue about whether they have enough coffee, and about how to set up the tent, with Nora hyper-critical and Solveig feeling unjustly persecuted. The film’s two spaces - the infinite wilderness and the cramped confines of the tent - play off against each other,  suggesting perhaps that we carry our prisons with us, or that nature is not always a healer.

Still long shots of the increasingly dark and forbidding mountain scenery alternate with extreme hand-held close-ups of the women’s faces as they argue, sulk and make up. Petersen and Solem are both excellent as two partners who know that their relationship is close to breaking point, neither of whom want to deal it the killer blow by letting the unspoken accusations spill out.

When they eventually do, the timing is just a little too predictable; so too is the resolution that follows. Held restrainedly in check for much of the film, Ola Flottum’s piano score brings on the organ and choir effects as the denouement unfolds. The film’s soundscape is more delicate, using microphone-in-the-wind effects that accompany the two women’s muffling of their true feelings.