The Pirates! In An Adventure With Scientists 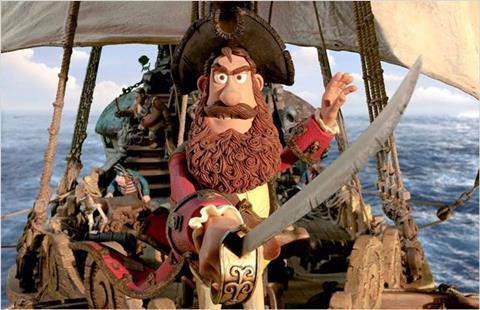 Swashbuckling family adventure on the high seas is the name of the game in the latest stop-motion animated film from British company Aardman (the company that made the Wallace And Gromit films), and while unlikely to knock Captain Jack Sparrow off the piratical top spot the film delivers smart, funny and energetic entertainment for all the family and is likely to have a long life and possibly more than a few sequels.

The Pirates! In An Adventure With Scientists opens in the UK and a series of mainland European territories on March 28 prior to its bow in the US (where it is released as The Pirates! Band Of Misfits) on April 27. Produced in association with Sony Pictures Animation, the film is a swaggering feast of pirate clichés while also taking the storyline into new and unusual directions.

Based on Gideon Defoe’s children’s book The Pirates! In An Adventure With Scientists (he also wrote the screenplay), the film is peppered with international voice talent - with Salma Hayek and Jeremy Piven as rival pirate chiefs - but at heart is resolutely British in tone (in a similar fashion to Aardman’s last animated film Arthur Christmas), with a recognisable cast including Hugh Grant, David Tennant, Martin Freeman, Imelda Staunton and Ashley Jensen taking on the key roles.

The Pirates! In An Adventure With Scientists is made in the stop-motion style that has become Aardman’s signature (and won them four Oscars via the Wallace And Gromit films and Creature Comforts), though the film also utilises CG - for the sea footage - which helps it deliver a busy and glossy 3D experience. As is often the case, the 3D glasses darken the colour, but this may vary depending on projection and glasses used.

Pirate Captain (voiced enthusiastically by Hugh Grant) is blessed with a luxuriant beard and boundless enthusiasm and with his loyal rag-tag crew embraces the pirate ways, despite being a less-than-successful terror of the High Seas. He is determined to win the much-coveted Pirate of the Year award, but would have to beat off his bitter rivals Black Bellamy (Jeremy Piven) and Cutlass Liz (Salma Hayek).

After a series of inept attempts to ambush other ships (ranging from a plague vessel through to a ghost ship) he ends up boarding a British vessel, only to find it contains no treasures, simply a young explorer named Charles Darwin (David Tennant). Darwin manages to convince Pirate Captain that money is to be made displaying the captain’s parrot in London…mainly because what Pirate Captain believes is a parrot is actually the last surviving Dodo.

The crew’s trip to the foggy streets of London - where pirates are hated and hunted - also brings them into dangerous contact with the pirate-loathing Queen Victoria (Imelda Staunton) and enter into a rollicking adventure that sees Pirate Captain finally getting his big chance to possibly win the much-coveted Pirate of the Year Award.

As is often the case with Aardman’s stop-motion animation there is delight in the detail. There is so much to see and enjoy in the background of the beautifully constructed sets that The Pirates! In An Adventure With Scientists deserves second and even third viewings. Intriguingly for a pirate romp, probably more time is spent in the streets of Victorian London than on the high seas, but this at least helps separate the film from the usual round of pirate film clichés.

Hugh Grant brings just the right amount of befuddled enthusiasm to the Pirate Captain, a genial fellow who loves the comradeship of his freebooting ways, despite being perhaps too good-natured to rise to the top of the pirate pile. His crew are equally oddball - ranging from Pirate with Gout (voiced by Brendan Gleeson) through to Surprisingly Curvaceous Pirate (yes, in fact a woman, voiced by Ashley Jensen) - though he cannot do without his loyal and trusty number two, Pirate with a Scarf (voiced by Martin Freeman).

The UK title of The Pirates! In An Adventure With Scientists may well be a bit lumbering, though presumably it will simply be called “The Pirates” by most audiences, and while often the laughs are subtle rather than raucous there is plenty of entertainment to be had. Some rather dark moments might scare the really young ones, but adults will appreciate the clever dialogue as well as the nuanced voice performances.