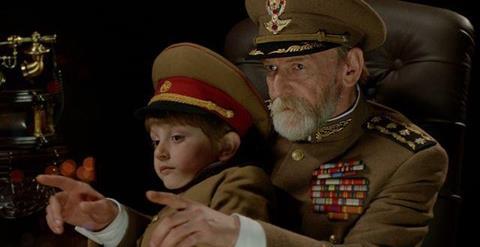 Somewhere in a faraway Caucasian country, an elderly president with a chestful of medals who lives in a tastelessly opulent totalitarian palace is deposed by a revolution, and forced to go on the run with his grandson, travelling incognito among the people he once oppressed. Emigré Iranian film director Mohsen Makhmalbaf’s latest work, set in a never-named former Soviet republic (and filmed in Georgia) wants to be a universal parable about man’s cruelty to man, a contemporary reflection on the way popular revolts sometimes replace old monsters with new ones, an emotional story of an old tyrant’s awakening to the suffering he has caused, accompanied by a child whose innocence is the only pure thing he has left.

The President is in the end a fascinating muddle of poetry and mush, astute observation and mawkish generalisations.

It’s a strange film, which for all its faults could achieve some commercial success, though not perhaps at the more demanding, cineaste end of the arthouse market. The script raises issues in woefully didactic ways, for example when it conveniently throws the fugitive despot in with a group of homeward-bound political prisoners.

The charm of the grandson played by oh-so-cute Dachi Orvelashvili turns unbearably gooey at times, as he asks grandpa wide-eyed, out-of-the-mouth-of-babes questions like ‘What is a terrorist?’. The ‘people’ the pair travel among are mostly stereotypes, painted in with broad brushstrokes, and the president’s attempts to sweeten the pill of life on the run for his grandson by pretending it’s all a game is straight out of Life is Beautiful. The director even makes a mess of some of the eyeline matches.

Despite all this, The President etches itself on the mind like the naïf frescoes of certain country chapels; in some scenes, Makhmalbaf’s attempts to pare the story back, to turn it into a cinematic folk tale, work resoundingly well. A scene in which the president forces a near-destitute barber to strip, give him his clothes, and then cut his hair and beard, is a case in point – pointing a gun at the neck of a near-naked former subject who is tremblingly shaving him with a sharp razor that could cut his throat in an instant somehow stands in for a whole political treatise; and unlike some of the dialogue, it makes the point without preaching.

The opening scene is another neat symbol of absolute power and its fragility. Seated on the terrace of his palace in full military regalia, surveying the capital, the president picks up a phone and has all the lights of the city turned out. He then passes the phone to his little grandson, who gives the order to turn them all on again. And then off, and then on – but this time the city stays dark. Between one order and the next, the balance of power has shifted.

Veteran Georgian actor Misha Gomiashvili invests the president with just the right mix of wariness, authoritarian impatience and world-weariness, and the script is right to keep his character enigmatic to the end, resisting anything like an easy change of heart. It’s a nice detail too that he’s saved not by his riches or military prowess but by an ability to play the guitar and strum local folk songs – thus enabling him and his dancing grandson to pass themselves off as street musicians. Visually, the film goes for a washed-out palette that looks, at times, like the stuff of faded Soviet bloc propaganda films.

Other choices are less well-considered: scenes in which a bride is raped by soldiers at a checkpoint, a visit to a prostitute the president knew in his youth, a full-volume-schmaltz sequence involving a returning prisoner whose fiancée has married another – all seem to derive from the melodrama-by-numbers school of filmmaking. Frustrating but also oddly memorable, The President is in the end a fascinating muddle of poetry and mush, astute observation and mawkish generalisations.