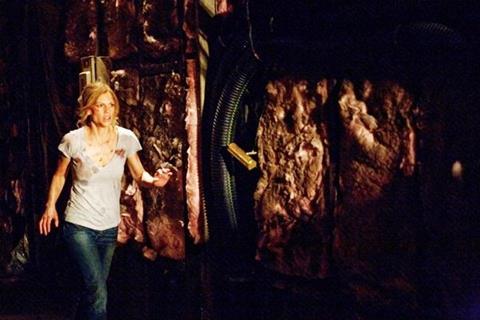 Gender-based clichés of fear get trotted out in The Resident, a goosing stalker thriller starring Hilary Swank that adds nothing new to the single-woman-in-peril subgenre. Released in the UK prior to its perfunctory, short-window, US theatrical release, in advance of an impending home video bow, The Resident has little time to make any sort of impression.

Swank has never been a personality-driven performer with large turnout appeal, as the disappointing theatrical grosses for both Amelia and Conviction attest. Coming on the heels of either of her two Oscar victories there might be more opportunity or interest for her toplining a film like this, but there currently seems to be little market for a work as indistinctive as The Resident, either in theaters or as much of a commercial programmer in ancillary markets.

Swank stars as Juliet Dermer, a New York ER doctor recently separated from her philandering husband Jack (Lee Pace). Though only half-ready to start a new life on her own, she soon lands what seems like a dream apartment. Her handsome and helpful new landlord is Max (Jeffrey Dean Morgan), who is fixing up the place, and lives with his leering grandfather August (Christopher Lee).

Before long Juliet is gripped by the feeling that she’s being watched, and she’s not wrong. Max reveals himself to be quite disturbed, and he reacts strongly to a potential reconciliation between Juliet and Jack. The proceedings build to a violent finale which serves a persuasive case against self-renovation.

In fitful fashion, Finnish music video and feature film debut director Antti Jokinen achieves a so-so mood of lingering creepiness, abetted by decent production design and the soft cinematography of Guillermo Navarro, who fills his frames with oaky hues and rich shadows. But Jokinen ladles on stale music cues and sound effects, and the movie’s editing is not always clear.

The Resident’s chief problem, though, is its script, by Jokinen and Robert Orr. It lacks any believable motivations, or artful enough dialogue to paper over this problem. Little more than an unconvincing collection of actions, it quickly abandons any significant flirtation with misdirection, settling upon Max as a villain and then cycling through a litany of sinister bits seemingly pulled in random order from a hat.

Swank by and large adequately conveys the juggled dual demands of steely, modern-day occupational professionalism and feminine vulnerability that such a genre exercise requires, but is consistently let down by the material. Morgan, meanwhile, trades in visual shorthand, deploying a variety of smirks and squints.