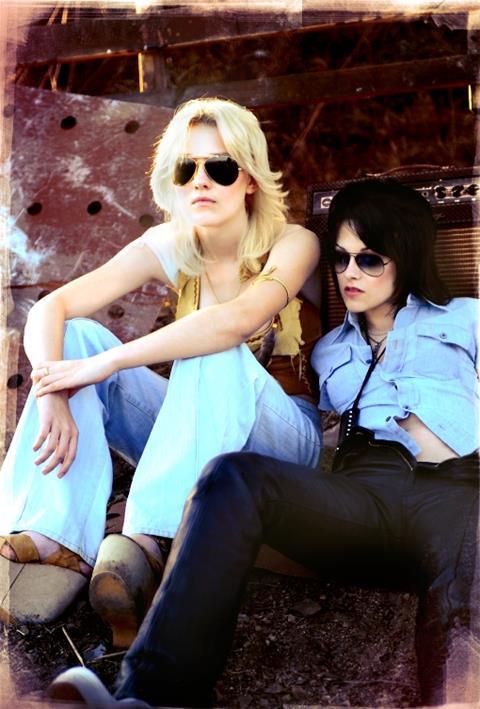 In The Runaways, music video director Floria Sigismondi’s debut feature, the early days of Joan Jett’s rock career are revisited without any cloying nostalgia. Sigismondi has made a rousing portrait of the eponymous 1970’s teenage band and taken a hard look at life on the road at a time when most girls with bands were groupies.

A vivid period piece, The Runaways is anything but an extended music video.

With two major young stars in the cast, The Runaways should connect with the young female audience internationally, perhaps leading to a revival in sales for the band’s three albums, all released pre-1977. Jett’s original fans could also be piqued by good reviews when the film opens domestically on March 19 through Apparition. Needless to say, Kristen Stewart’s glow from Twilight will help globally.

Basing her script on the memoir Neon Angel: the Cherie Currie Story by the band’s singer Cherie Currie (Dakota Fanning), Sigismondi brings us back to the days when aspiring rock girls were Bowie fans (with obligatory Bowie hair) and punk was an as-yet unformed barrage of angry testosterone.

The story builds around Jett (who executive produces) and Currie, with Jett as the serious girl who always knew she wanted to play music, and Currie as the 15-year-old blonde recruited in a bar for her looks and later taught how to sing.

Both actresses sing themselves and perform more than competently. Stewart, who conveys Jett’s no-nonsense determination, lacks the singer’s guttural raspiness, but her voice and attitude do the job. Fanning as Cherie, meanwhile, starts out as a shy girl who gets by on her looks. In an audition scene in the filthy abandoned trailer where the group rehearsed in 1975, she is depicted stumbling clumsily through what would become the incendiary tune, Cherry Bomb, moments after manager Kim Fowley (Michael Shannon) and Jett write the song on the spot.

Fanning’s performance of the same song during scenes showing the group’s 1977 tour of Japan reveals the singer that Currie had become, and reminds us why the song terrified the parents of teenage girls.

Sigismondi uses performance scenes sparingly but effectively, balancing the romance of the road with a backstage reality check. Conflicts would eventually lead to Currie’s departure from the band in 1977.

Crucial to The Runaway’s sprint to stardom was manager/svengali Fowley, a profane rogue without a conscience who gave the girls their first break.

As Fowley, Shannon relishes in the gonzo rock entrepreneur role, erupting with zinger lines that any comedian would envy. Music “is not about women’s lib,” he lectures Cherie, “it’s about women’s libido.”  Despite his agenda of greed and lust, which Shannon plays to the hilt, the eager girls signed with Fowley nonetheless.

Cinematographer Benoit Debie and production designer Eugenio Caballero capture the disco kitsch of those early days (alongside the blandness of the suburban “valley” that the girls fled), and chart the visual evolution toward hardened punk.

Stewart and Fanning give us the musical and sexual cockiness of teenage ambition, along with its constant vulnerabilities. Yet performances are not overplayed in an effort to make The Runaways another Sid and Nancy. The same deft modulation sustains scenes of Cherie’s volatile family life, in which Riley Keough (Elvis Presley’s granddaughter) plays her twin sister Marie, who stays home reluctantly to care for their drunken father.  Tatum O’Neal is blithely vain as the girls’ inattentive mother.

A vivid period piece, The Runaways is anything but an extended music video. It is an auspicious turn for Sigismondi.