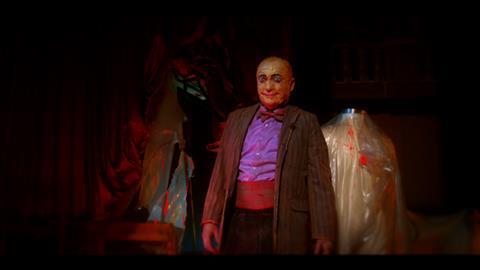 Horror anthology The Theatre Bizarre is made up of six quirky, Grand Guignol-esque shorts from directors including effects whizz Tom Savini. Though cult horror fans will certainly be the primary audience, there’s enough gory fun on offer for this US-French omnibus to have some crossover appeal as well, especially when it reaches the home entertainment marketplace.

Several of the segments make up for their lack of polish with a clear relish for their genre.

After screening at a number of horror festivals last year, the film gets a limited US theatrical release this month through W2 Media. Outside the US, the use of international locations and talent may create interest in territories including the UK, France, Germany and Canada.

A framing device has a disturbed young woman stumbling into an abandoned theatre where a creepy marionette (played by German veteran Udo Kier) introduces the six tales.

The first, directed by Richard Stanley (Hardware) and set in the French countryside, is a moderately effective Hammer Horror-style piece about an attractive young couple and a witch (played by British horror queen Catriona MacColl).

The best of the half dozen are Savini’s grisly Wet Dreams, about the Freudian nightmares of an unfaithful husband, and The Accident, a surprisingly poetic musing on a child’s view of death directed by Douglas Buck (Family Portraits: A Trilogy of America).

While the effects were clearly done on a budget and the scripts are often flimsy, several of the segments make up for their lack of polish with a clear relish for their genre.

W2 has already announced a sequel to be released in 2013.