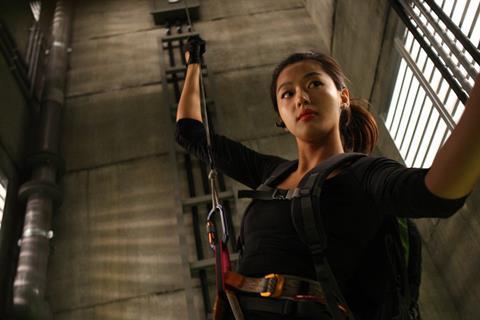 With its impressive choreographed set-pieces and compelling script, together with a smartly chosen ensemble cast that includes a number of iconic names from across Asia, The Thieves hits all the right notes to become one of the most talked-about films of the summer. It may owe much of its success to the tried and tested formula found in Steven Soderbergh’s ‘Ocean’s’ series, but much like his previous caper films (Tazza: The High Rollers and The Big Swindle) director Choi Dong-hoon is able leave his own mark.

It is hard to fault its well-crafted set pieces, superb sound-design and vibrant soundtrack that compliments the film’s strong visuals.

The film has performed exceptionally well in its home market of South Korea, amassing just over two million admissions ($13m) on its opening weekend, and has recently broken the 10 million ticket barrier (approx $64m) in just three weeks, as it remains on course to become one of the most successful local films of all time.

Furthermore, given its pan-Asian cast, which includes local superstar Gianna Jun, as well as Hong Kong’s Simon Yam and Malaysian actress Angelica Lee, it’s set to continue to attract a number of buyers from across the Asia-Pacific region. Also noteworthy is the number of Asian locations used in the film as well as the multilingual dialogue, which may also entice buyers as it is set to hit film festivals beginning with Toronto next month.

The film follows a group of thieves led by Popeye (Lee Jung-jae) as they team up with a Hong Kong crew brought together by Macau Park (Kim Yun-seok) to steal a $20 million diamond that’s being kept in a casino in Macau, but as the narrative unfolds, it becomes clear they all have their own personal agendas.

In terms of the film’s plotting, it’s perhaps difficult to differentiate The Thieves from any other heist film, but Choi along with scriptwriter Lee Gi-cheol collectively put together a dynamic script that’s full of wit and energy. Crucially, it allows many of the cast, though not everyone, a bit of room to breathe so they can fully develop their respective characters. Gianna Jun in particular has benefited enormously from her role in this film, as she’s been able to showcase her talent following a number of miscasts.

Technically, the film isn’t quite flawless, but overall, it is hard to fault its well-crafted set pieces, superb sound-design and vibrant soundtrack that compliments the film’s strong visuals.

It may not boast an array of originality, but makes up for its shortcomings in its solid execution, and while it’s unlikely to perform as well in other markets, it should make an impression.