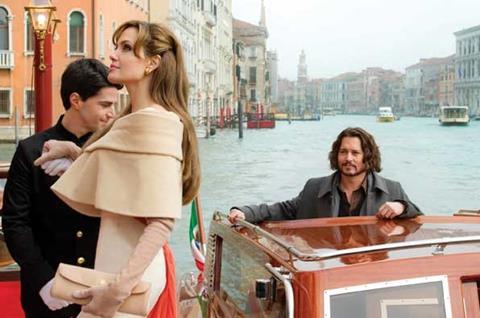 As the follow-up to his sombre, thought-provoking Oscar-winner The Lives Of Others, director Florian Henckel von Donnersmarck has gone in exactly the opposite direction with The Tourist, a fun, thimble-deep, romantic thriller with big stars and not an ounce of nutritional content. Boosted by loose, assured performances from Johnny Depp and Angelina Jolie, von Donnersmarck’s love story set amidst a tale of mistaken identity and international intrigue may be utterly preposterous, but the director and his cast give the material just the right amount of style and humour to help this bonbon go down smoothly.

Depp and Jolie do a commendable job of grounding the proceedings in a certain amount of believability as the film giddily becomes more ludicrous at it strolls along.

The Tourist may not have the hype of a TRON Legacy, but with two major stars in its arsenal, this Sony release will cater to date-night crowds and adult audiences who may be turned off by the season’s more effects-heavy or youth-skewing offerings.

British beauty Elise (Jolie) boards a train from Paris to Venice, following instructions from her in-hiding lover Alexander to befriend an unsuspecting passenger who resembles him so that those on his trail will think he’s Alexander. Elise finds such a patsy in Frank (Depp), a widowed American schoolteacher on vacation alone. Soon, a gangster (Steven Berkoff) is after them, convinced that Frank is the mysterious Alexander, who stole billions of dollars from him.

Though von Donnersmarck’s Hollywood debut most clearly references North By Northwest, The Tourist is generally a riff on all Hitchcockian thrillers in which dangerously gorgeous women and unexpected double-crosses could prove fatal to our innocent hero.

Consequently, The Tourist is a movie that seems to have been constructed almost entirely out of other movies: If the director’s The Lives Of Others was steeped in realism, then his new film is a sly, delicious fantasy, one in which mediocre Frank can suddenly be seduced by glamorous Elise, stay in Venice’s most luxurious hotel, survive being chased by gangsters, and even show off his superb ballroom-dancing skills at a gala event he’s crashed.

This is a film, in other words, in which one cannot get hung up on the story’s utter absurdity, and Depp and Jolie do a commendable job of grounding the proceedings in a certain amount of believability as the film giddily becomes more ludicrous at it strolls along.

Depp in particular is quite good playing an average guy slowly coming to terms with the danger he’s inherited by falling for Elise, which is a nice change of pace after his exaggerated turns in the Pirates Of The Caribbean films and Alice In Wonderland. By contrast, Jolie is meant to portray a stunning, seemingly unobtainable beauty – she’s essentially playing a movie star – and she gives Elise all the sex appeal and mysteriousness that Frank can stand.

Much of the fun of The Tourist comes from the suspense of precisely what Elise and Alexander are plotting, and who the clandestine Alexander is. Unfortunately, the screenplay – credited to von Donnersmarck and Oscar-winners Christopher McQuarrie and Julian Fellowes – isn’t nearly as elegant in its revealing of some of the surprises that await. Additionally, though Depp and Jolie banter back and forth in a pleasingly sophisticated manner, the film seems to rush their romantic courtship, which makes the finale’s final twist less satisfying.

But considering that The Tourist is largely a frothy entertainment, character moments aren’t treated with the same importance as the film’s look, which is exquisite. Set largely around the canals in Venice, The Tourist features no sex, but the way cinematographer John Seale and production designer Jon Hutman present the city could certainly be described as travel-porn.