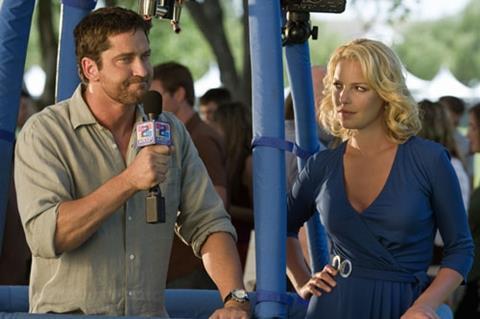 The Ugly Truthdeals with the battle between the sexes, but the main casualties here are viewers of this coarse, contrived romantic comedy. Working from the mouldiest of premises – a prim, type-A female must work with a boorish, misogynistic man – this Katherine Heigl vehicle flaunts its sexually explicit tone in the hopes of radiating contemporary hipness, but plays out as both desperately vulgar and formulaically sappy.

The Ugly Truth opens domestically on July 24 hoping for a boost from TV crossover star Heigl, who has form in this genre with Knocked Up ($219m worldwide) and 27 Dresses ($160m). Competition-wise, it’s facing down residue business from The Proposal and the upcoming Funny People and The Time Traveler’s Wife. Gerard Butler’s 300 ($456m) and PS I Love You ($157m) have performed significantly better in the international marketplace, however, where the star is a known commodity.

Beneath the four-letter words and stabs at bawdy humour, this peddles the same romantic fantasy as its tamer counterparts.

Workaholic TV producer Abby (Heigl) oversees a struggling morning show which has just hired Mike (Butler), an obnoxious relationship expert. He tells lonely women to embrace the fact that men want sex, not love, drawing Abby’s ire initially although she warms to him a little when his advice helps her land hunky doctor Colin (Winter).

Throughout, The Ugly Truth seems very pleased with itself for how “naughty” it is being. But whether it’s Mike’s pseudo-revelatory dating advice or a lifeless running gag about the morning show’s sexually frustrated married anchors (played by Cheryl Hines and John Michael Higgins), the laughs tends to be as edgy as a TV workplace sitcom.

The screenplay, which is credited to three writers, moves along a predictable path – Abby and Mike initially don’t get along, but eventually they’ll fall for each other. For this opposites-attract scenario to really shimmer, though, the characters’ warring personalities need to be dynamic. Neither lead has much to work with here.

Heigl plays a version of the responsible, mature-beyond-her-years professional from Knocked Up and 27 Dresses, although without their lovable vulnerability. Mike, meanwhile, is meant to be modeled on controversial talk-show hosts who draw ratings because of their inflammatory remarks, but his mildly pigheaded philosophy about women isn’t smart or outlandish enough to raise an eyebrow in the real world. That fact that his lackluster comments inspire such hyperventilating in the film’s other characters only underlines how conventional this The Ugly Truth is at its core.

Beneath the four-letter words and stabs at bawdy humour (including a dreary sequence involving a mishap with vibrating panties), The Ugly Truth peddles the same romantic fantasy as its tamer counterparts. While Abby initially attracts the sweet-natured Colin by following Mike’s cynical, game-playing rules about relationships, inevitably The Ugly Truth will come down on the side of true love, even if the majority of the film’s running time has been devoted to Abby and Mike bickering like adolescents over which gender is more screwed up.