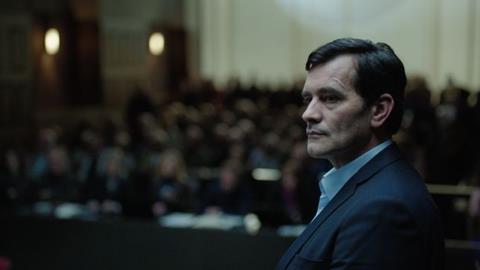 A clever and tense courtroom drama, writer/director Jan Verheyen’s highly watchable film focuses on a flaw in the Belgian legal system that allows a killer to go free and sets an honest on a path of vengeance and self-destruction. The Verdict (Het vonnis) – a rather obvious and much-used title for a courtroom tale – is impressively shot and staged, though does settle into its courtroom structure fairly on, despite a finely and imaginatively staged series of opening sequences.

Verheyen shoots with skill and precision, making great use of the widescreen format and keeping The Verdict moody and atmospheric, favouring an edgy colour palette.

It may well be a much trot and familiar tale, but Verheyen’s good use of widescreen cinematography and the brimming sense of anger and injustice that drives the film sets it aside. The film opens locally on October 9 after its world premiere at the Montreal Film Festival and should attract interest from buyers – especially broadcasters.

Highflying businessman Luc Segers (Koen De Bouw) has a loving wife Ella (Joke Devynck) and a sweet daughter (Nell Cattrysse), but his perfect life shattered when the family stops at a petrol station late one night after attending a company party.

His wife is attacked and killed when she heads across the road to pop into an automated vending operation, Luc is attacked and knocked unconscious when goes to help and their daughter is run over by a car when running towards her parents. When he emerges from a coma he finds his family have already had funerals.

He manages to identify the killer from police mugshots as Kenny De Groot (Hendrik Aerts), but with a trial looming he is mortified and upset when De Groot’s lawyer Teugels (Veerle Baetens) spots a procedural error – one document had not been signed – and the case is dismissed and De Groot set free.

Unable to work and obsessed with the crime and criminal he starts stalking De Groot, eventually killing him and giving himself up to police. He refuses to be tried on a manslaughter charge and wants his time in court to try and draw focus to the justice system that served him so badly. What follows is a series of discussions, arguments and counterarguments that last months, with Luc not allowed to talk in court and with the legal system determined to save face and give him a strong sentence, despite strong public opinion.

As might be expected, the courtroom do become a little plodding and samey as the films draws on, but Verheyen shoots with skill and precision, making great use of the widescreen format and keeping The Verdict moody and atmospheric, favouring an edgy colour palette. The end of the film flags up the fact that similar procedural errors still sees dozens of people go free and that a 2002 proposal to close the loophole has not yet been debated by the Belgian parliament.