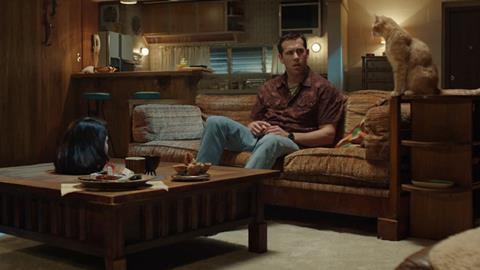 A risky mix of tones pays off in The Voices, one of the more playful, compassionate portrayals of a serial killer you’re likely to see. Led by a just-right performance by Ryan Reynolds, the latest from director Marjane Satrapi (Chicken With Plums, Persepolis) takes a slightly fanciful but largely straight-faced approach to externalizing a tormented mind. Consequently, this is a dark comedy that doubles as a psychological horror movie, sidestepping either genre to be its own peculiar creature.

More reminiscent of Reynolds’ indie work in The Nines and Buried than his mainstream fare, The Voices will need to find an adventurous distributor who will champion the film’s unusual mix of genres. Cult audiences will be a major draw, although a supporting cast that includes Anna Kendrick and Gemma Arterton should boost commercial appeal. Interestingly, though, fans of Satrapi’s earlier films may find the bloodshed and macabre mood of The Voices not to their taste.

Reynolds plays Jerry, a smiling, strange small-town factory worker who has an unspecified history of mental and emotional problems. Jerry seems sweet enough, but what his co-workers don’t realise is that when he goes home, he has in-depth conversations with his only friends, his cat and dog (both voiced by Reynolds).

Jerry’s loneliness seems to subside after he takes a liking to Fiona (Arterton), a kind-hearted co-worker, but through a series of unfortunate coincidences one evening, he ends up accidentally stabbing and killing her. Afraid of what he’s done, he seeks guidance from his pets, who offer the helpful suggestion that he should now kill someone on purpose to see what that feels like.

Satrapi’s previous films Persepolis and Chicken With Plums (both of which were adapted from her graphic novels and co-directed with Vincent Paronnaud) were tales of whimsical dreamers who escaped into fantasy. With The Voices (which Satrapi directed on her own), she again shines a spotlight on an outsider, but this time the individual is deeply disturbed. As we’ll discover, Jerry’s self-constructed fantasies are the thin bubble protecting him from the ravaging storms inside his head.

At first, The Voices appears to be an ironic comedy about a dim-witted nobody in a boringly nondescript part of America. (Seen in that light, Jerry’s conversations with his pets could be interpreted as just an odd quirk of his.) But after Fiona’s shocking and unintentional death, Satrapi dares to shift direction, going for more gruesome comedy but also striking a curiously affecting note while filling in more of Jerry’s backstory and revealing the extent of his depravity. Michael R. Perry’s screenplay keeps the audience planted next to Jerry, and so we see The Voices largely through his perspective, a technique that allows the filmmakers to upend our perceptions of who this seemingly well-meaning man is.

In his best work, Reynolds has delivered empathetic, casually urgent performances that uncover a depth beneath the all-American handsomeness. In The Voices, he uses his looks as a kind of mask, a blandly appealing ruggedness that at first suggests stupidity but eventually indicates a man trying to hide his torment behind a charming face. Neither Satrapi nor Reynolds condemn Jerry — instead, they try to present his fractured psyche as matter-of-factly as they can — and it’s up to Reynolds to show the character’s inner struggle. The key to the performance is that Jerry never quite recognises how demented he is, and so Reynolds plays him as if he really was just a decent, slightly awkward ordinary guy — albeit one who finds that killing gets easier the more that you do it.

Working with cinematographer Maxime Alexandre and production designer Udo Kramer, Satrapi occasionally paints her movie in deceptively bright interiors, all the better to disorient the viewer later with sinister locales that visually express Jerry’s steadily deteriorating state. The contrast in tones and styles isn’t always fluid, but The Voices succeeds in humanising Jerry. That process is aided by an especially likeable performance from Kendrick as another co-worker who begins to develop feelings for the shy, sweet Jerry. Her scenes with Reynolds have an understated loveliness that make one wish that Jerry could somehow find his way to a happy ending. To get an audience to feel that way about a murdering psychopath is no small achievement on Satrapi and Reynolds’ part.