This Is Not A Movie 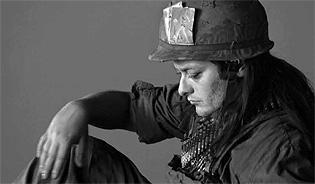 Olallo Rubio is well known in Mexico from his radio days, when his popular programme focused on music and social issues. Perhaps the name recognition will help the film’s domestic release in January on 60 screens. One drawback for Mexican distribution is that it is in English, set in Las Vegas (though almost entirely in a dark old hotel suite), and stars actors who are almost forgotten (Furlong, playing three roles, all named Pete), minor (Coyote, in a small part), or unknown (Gathegi, portraying a superimposed phantom with little screen time).

Political points are made as melanges of rapidly cut shots of everything from Hitler to nuclear testing to American soldiers fighting abroad.

In the scheme of things, however, the English and cast names are the least of this film’s multiple problems. Most likely, it will not travel anywhere, no matter what language people speak. It just had its premiere out of competition at the Morelia International Film Festival.

The themes from Rubio’s radio days are there, but all wrong for a film. The music is less percussive than concussive. Political points are made as melanges of rapidly cut shots of everything from Hitler to nuclear testing to American soldiers fighting abroad, and, for no justifiable reason, most of these are shown on television screens (one of which Pete sometimes wears on his head). They go nowhere, impressions of mankind at its worst rather than some coherent argument leading toward anything resembling a point. Perhaps that is the point.

The setting is an upcoming apocalypse, scheduled for the following day and counted down with some of the overused text that runs throughout, and never explained, save for random mentions of how awful the world is. Petes 1 (the straightest of them), 2 (an unshaven drunk), and 3 (hippie-like and mostly, without justification, pictured on a screen) banter in a down-to-earth guy way, so that chatter about sex and drinking is interspersed with their dystopic musings.

The idea that “this is not a movie” finally emerges, somewhat ironically, because as the film frenetically moves on, the possibility that all these happenings are part of someone’s screenplay in which they are all fictional constructs becomes more and more feasible. Coyote, introduced early on as a CEO of Propaganda at a corporation, reappears in the final few minutes, reborn as a long-haired screenwriter. Without divulging the outcome, let’s say he has something to do with film’s narrative arc and characterisations.

Furlong was a charming teen actor with an endearing whiny voice. Now after a very long hiatus out of the profession, he has a doughy presence that does not gibe with his adenoidal twang. Playing three roles is surely the dream of many actors, but unfortunately this one is given way too much opportunity by his director to gobble the limited scenery in which this misfire takes place.