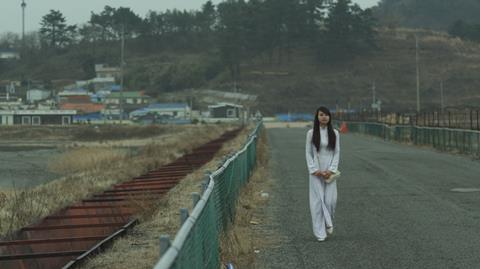 A slow-burn drama that gets increasingly complex and dark as it tells its intriguing tale of a Vietnamese woman whose South Korean husband dies in a motorcycle accident, the rather ploddingly titled Thuy starts as an apparently well-meaning suburban drama before spiraling into a rather tense crime thriller.

The film offers an unusual delve into Korean society, tackling the rights and realities faced by outsiders in a closed-knit community.

It is a controlled and shrewdly structure debut from Kim Jae-han, and while perhaps to dramatically lightweight to break-out, it has a subtle balance of traditional rural family drama with a slowly revealed crime story that may make it appealing to festivals. Thuy had its world premiere at the Busan International Film Festival.

Vietnamese woman, Nguyen Thi Thuy (Ninh Duong Lan Ngoc), is married to a Korean man and lives with her in-laws in rural Korea, who she is devoted to. One day, her gambling-addict husband is killed in a motorcycle accident. but woman gets suspicious because the man, who had lost several fingers, was not even able to ride a bicycle.

She wants to investigate her husband’s death, but in her rural village a rather brutal team of locals patrol the community, dishing out brutal beatings to this who misbehave and seemingly having more power and control than the local police.

Sergeant Lee, a police officer recently assigned from Seoul wants to help her, but the local police chief favours inaction, and as Thuy starts to find out more about her husband’s gambling problems she ends up stirring the local community, with the community patrol squad wanting the investigation stopped so that the tense community status quo is regained.

The film offers an unusual delve into Korean society, tackling the rights and realities faced by outsiders in a closed-knit community as well as having a sub-plot about domestic violence as battered women try to face up to their abusive husbands. The film gets more interesting, though, when the crime aspect of the story kicks in, and the last third is nicely staged, especially a showdown between Lee and the security patrol in their headquarters which leads to a shocking twist the sets the film on its increasingly dark head.