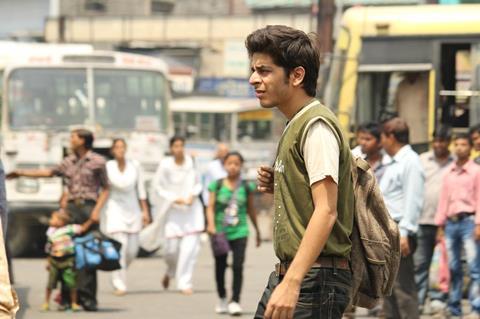 As far away from the classic spirit of Bollywood as any Indian film could wish to be, Kanu Behl’s fiercely uncompromising look at the underbelly of Delhi and its dwellers is – while never pretty - a pleasant surprise. A debut film that deliberately avoids anything that might be pleasant to the eye or the ear (the seedy atmosphere and the gloomy aspect of the slum in which it all takes place being one of the films main assets) it nevertheless manages to tell a sordid story in a gripping manner that grips down to the last couple of minutes, pulling more rabbits out of its dilapidated hat with every new twist of the story.

To Behl’s credit, as wretched, repulsive and disgusting as his characters often are, it’s impossible to ignore them, because there is a spark of human grace even in the least appealing ones.

In the plot there isn’t even one character who is less than a liar and a cheat, and even those would be probably the most commendable features they do have. Titli (which means literally Butterfly) is the youngest of three brothers who got his name only because his late mother was expecting a daughter and didn’t bother to find something better when she got yet another son instead.

His older siblings, Vikram (Ranvir Shorey, the only full time professional actor in the cast) and Bawla (Amit Sial), with whom he shares the same half-built, half-ruined, home, are both violent brutes, the first one nasty and vicious, the second just nasty. Both are small time hoodlums whose main job is to hijack cars on the road and sell them at a discount.

Though he is a full partner in the unsavoury family business, Titli (Shashank Arora) desperately wants out and would do anything - beg, steal or borrow - to get the money he needs for it. When his brothers think that a woman might add another angle to their business, they marry Titli off against his will to Neelu (Shivani Raghuvanshi) whose distaste for her new partner in life is written all over her face. Unsurprisingly so, because she has romantic plans of her own, involving a married building contractor who had promised to divorce his present wife and take her instead.

Needless to say, no one here is speaking the truth, nobody intends to fulfill any obligations unless there is no other choice, beatings and killings are inevitable occurrences on a daily basis, the police is running the corruption, morality is a luxury neither the rich nor the poor are interested in and Titli squirms through the mire, looking for an exit which even the relative happy ending, not quite fit for the tale preceding it, promises him.

To Behl’s credit, as wretched, repulsive and disgusting as his characters often are, it’s impossible to ignore them, because there is a spark of human grace even in the least appealing ones. His cast, mostly consisting of inexperienced actors, instill lots of fiery passion  in their respective roles, with a couple of remarkably intense scenes between Arora and Raghuvanshi standing out among others.

A few script glitches here and there, some pacing issues towards the end and wrapped up with melodrama may well be par for the course in a first film, but Behi’s energy pulls the film through with such drive that most pitfalls will be ignored.