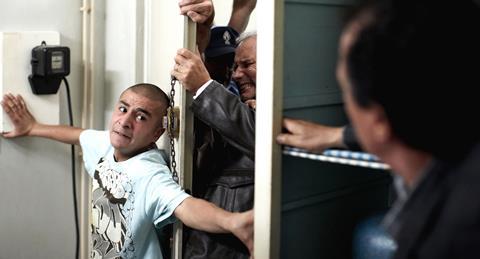 Part of the film’s hold comes from the entertaining twists in the relationship between the three men who end up barricaded in a suburban council flat together; part comes from spot-on casting and bravura no-holds-barred performances - especially that of Aymen Saidi as a hothead French-Algerian delinquent.
This may be a difficult title to market outside of France, as it’s potentially a broader film than its low-budget look and the social issues associated with the French banlieues would suggest. But arthouse miniplexes are often looking for lighter comedy-tinged features to set off their more testing titles, and TFLW fits the bill perfectly.

The films starts in unhurried mode with the preparations for an eviction to be carried out by stroppy bailiff Francois (Girardot), who is accompanied, as usual, by local police. But when meek Algerian-born Mohand (Fellag) opens his apartment to the bailiff his son Salem (Saidi) loses it, grabs a gun - and ends up with his father and Francois barricaded inside the apartment, while the police outside send for reinforcements. The problem, for Salem, is not the eviction - it’s the fact that he’s been babysitting five kilos of cocaine, and the local drug lord will kill him if it gets impounded.

As Salem imprecates against the cops, the bailiff and the father he considers to be a coward (unlike an uncle who he believes died as an Algerian freedom fighter), the script introduces little nudges of comedy: for example in a scene where hostage and father discuss how kids these days are just impossible, or in a TV news bulletin, which shows how in a few short hours the hostage-taking has been spun into a full-scale terrorist scenario. Cianci’s real intuition here is to keep things authentic throughout: the laughs arise from real people in a real fix rather than gags and routines, and the film benefits from this groundedness.

Gradually Mohand reveals a secret about the past that shows his son that he’s not such a wuss after all; and we begin to understand too why one of the cops had referred to Francois as ‘Che’ at the beginning of the film (he’s a former revolutionary turned capitalist enforcer - but now the old rebel fire begins to burn once more).  And without going soft, Mohand at least begins to see life, and his father, in a new light.

Constantly threatening to stutter to a halt, the script keeps reviving itself with new ideas. And sure, the banlieue riots backdrop has been done in French cinema before - in Skirt Day, even more recently in zombie flick La Horde - but never with such insider humanism. The functional photography may not look like anything special, and the Arab-inflected soundtrack is sometimes a little too jolly for its own good, but neither stop Top Floor LeftWing from being a likeable and watchable little cross-genre curio.