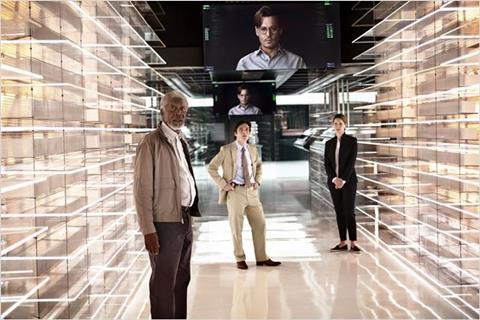 Transcendence comes packaged as a cautionary sci-fi drama, warning us about the dangers of unchecked technological advancement. But for all its chilly, blatant declarations of doom, the directorial debut of long-time Christopher Nolan cinematographer Wally Pfister works better as a subtly mournful love story between co-stars Johnny Depp and Rebecca Hall. As a result, Transcendence is one of those rare cases where a film’s big, marketable hook isn’t really its selling point, the story’s grand themes not nearly as resonant as its more modest exploration of intimate emotional terrain.

After his oversized portrayals in The Lone Ranger, Alice In Wonderland and the Pirates Of The Caribbean films, Depp comes across as rather restrained here, a blessed relief as he hooks in to Will’s shyness and insularity.

Featuring Depp in his first role since the underperforming The Lone Ranger, Transcendence will be a test of the star’s current commercial clout. (His last two films, The Lone Ranger and Dark Shadows, each managed to gross around $250m worldwide, a respectable number except for the fact that their combined budget was approximately $375m.) Transcendence will probably skew older than its main competition, The Amazing Spider-Man 2, as it hopes to court an audience less interested in action spectacle and more attracted to a sobre, grownup thriller.

The film stars Depp as Will Caster, a brilliant, introverted scientist specializing in artificial intelligence. He believes he’s in reach of achieving his lifelong dream to create a computer with the self-awareness and emotional complexity of human beings, but a radical anti-technology organisation that calls itself RIFT (led by Kate Mara’s Bree) ambushes him at a conference, shooting him with a bullet laced with poison. With only weeks to live, Will accepts his fate, but his wife and fellow scientist Evelyn (Hall) doesn’t, deciding to upload his consciousness to their mainframe. His body may die, but she’ll make sure that his spirit lives on inside the machine.

The results of Evelyn’s plan, which is strongly discouraged by their close friend Max (Paul Bettany), play out in fairly predictable ways. Working from newcomer Jack Paglen’s screenplay, Pfister has constructed a sleek sci-fi drama built around a familiar lament: Humanity’s thirst for knowledge and scientific progress can lead to disaster when we start trying to play God. Made with intelligence and fleshed out by a fine cast, which includes Morgan Freeman and Clifton Collins Jr., Transcendence dramatises Will’s drive to use his super-genius for the greater good, such as regenerating lost limbs and curing the blind. But it doesn’t take a scientist to guess that soon enough he’ll resent others’ desires to reign in his power, leading to catastrophic consequences and a deadly showdown.

But even if Transcendence’s twists and message aren’t all that surprising, Pfister manages to find enough of what’s intellectually stimulating about this material to keep the proceedings suitably engaging. Though somewhat haphazardly, Transcendence makes room to comment on the seduction of cults, the hypocrisy of those resistant to scientific progress, and the ease in which noble intentions can go awry when ego gets in the way. To be sure, Pfister cannot be accused of making a movie devoid of ideas, but they aren’t always explored with much finesse, which makes this rather conventional thriller’s overly sombre tone all the more troublesome: The director seems to believe he’s actually delivering profound, unsettling truths.

Interestingly, at the same time as Transcendence is worrying over technology’s increasing encroachment into our lives, the movie is simultaneously telling a far more intriguing story, one that risks being overshadowed by all the thematic handwringing.

Because she’s supportive of her husband’s work and can’t bear the thought of losing him, Evelyn downloads his consciousness, creating a virtual version of Will. But despite the concerns of people like Max, Evelyn stands by her husband, even when his ambitions see him gaining such power that he poses a threat to world security.

Hall’s performance could be easy to overlook, but Evelyn is no mere dutiful love interest. In fact, she’s the film’s main character, and Transcendence is best when it focuses on her shifting relationship to her husband, transitioning from passionate supporter to self-deluded enabler to independent thinker. And in its quiet way, Transcendence’s struggle between Evelyn and Will is an apt metaphor for marriage: how one person’s desires can be subsumed by the other; how we project our failings onto our partner; how the idealized version of our mate may not necessarily be ideal; and how we cope with the pain of losing that other person.

Because of the recent release of Her, which also dealt with artificial intelligence and love’s complexity, Transcendence may feel behind the curve on these issues. But Evelyn’s slow-motion realisation of the tragedy she’s unwittingly concocted — first refusing to let her husband go and then refusing to see what’s he become — gives this movie a poignant edge. Transcendence wants to decry humanity’s loss of its soul to technology, but it actually has more to say about the ways we lose ourselves in the people we love.

Pfister won the Best Cinematography Oscar for Inception, and as with his films for Nolan, Transcendence exudes an air of sombre, steely sophistication. Pfister and his cinematographer Jess Hall occasionally drape the movie in almost noir-ish dark tones, with production designer Chris Seagers giving the high-tech layout of Will’s compound an antiseptic, dazzling-white inhumanness perfectly in keeping with the disembodied character. Adding to the sense of Nolan déjà vu, Pfister has recruited actors like Freeman and Cillian Murphy, who are familiar from Nolan’s films, and composer Mychael Danna delivers a pounding, percussive soundtrack reminiscent of Hans Zimmer’s Batman and Inception scores.

As for Depp, he’s the main marquee attraction, but in the film he’s more of a supporting character, sometimes just a voice speaking to Evelyn and others. After his oversized portrayals in The Lone Ranger, Alice In Wonderland and the Pirates Of The Caribbean films, Depp comes across as rather restrained here, a blessed relief as he hooks in to Will’s shyness and insularity. Hall really carries the movie’s emotional burden, and Depp to his credit stays out of the way, letting his co-star steal Transcendence from him.