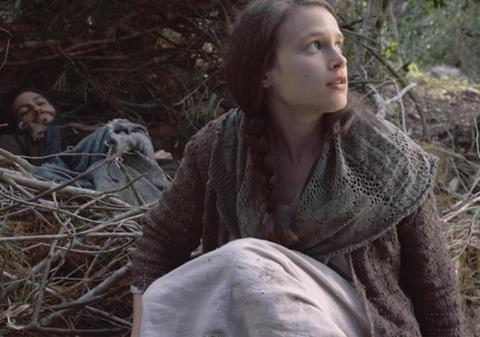 An adaptation that works much better in theory than in real practice, Amos Gitai’s take on Aharon Appelfeld’s homonymous novel would be more accurately served by a title such as ‘Free Musings On Selected Moments From An Aharon Appelfeld Novel’. This unfortunate meeting between a filmmaker interested mostly in form and a writer concerned more than anything with human beings may make some sense to viewers who prefer to have their films dished in individual images and do not really worry about the sense they make, once they are put together. The rest will be wondering.

Both Adler and Olinski, in the forest scenes, look rather lost and disoriented, frightened animals trying to survive the best they can.

It is doubtful whether anyone who has not read the original novel, could guess from this film what it is all about, but they can of course appreciate the extensive length of each separate shot; the composition of the soundtrack and a general mood of forlorn solitude in the wilderness. Put together, it doesn’t really provide the narrative. Gitai claims in his press book that departing from a literal adaptation is permissible, as long as it contributes to the general understanding of the whole. In this case, it doesn’t.

In Appelfeld’s story, Tsili is a rather simple-minded 12 year-old girl left behind by her family in 1942, when they escaped the anti-Semitic rage that swept all of Eastern Europe at that time. Miraculously she manages to survive, goes wandering in the nearby villages scrounging for food from the few peasants who are willing to help her before they chase her away, faces for the first time the world of the adults and its complexities, finally hides in the forest and feeds on wild roots and anything else she can find, until she meets Marek, who had escaped from a concentration camp but cannot take it off his mind. The Holocaust is never represented frontally in the story, but its presence lurks threateningly in the background all through, oppressively weighing down on its narrative.

Gitai’s film, like all his previous ones, is divided into chapters, sequences consisting of extensive shots, loosely interconnected, showing Tsili (played alternately by Sara Adler and Meshi Olinski) all alone in the forest, a frightened animal in search of anything edible, then Marek (Adam Tsekhman) shows up out of nowhere. After a lot of turning and twisting, almost like wild beasts checking each other out, they settle together in Tsili’s nest and even make love, then they talk about having to go the nearby village for some food, and then Marek disappears.

There is a long coda, with Holocaust survivors waiting on the beach for a boat to take them away, most likely to Palestine, though one of the men there rejects the idea, and then an additional coda, probably already in Palestine, with the intervention of a voiceover reading in Yiddish (Appelfeld writes in Hebrew but Yiddish was the language used by Jews in the Diaspora) of the novel’s opening paragraphs.

But once again, Gitai is more interested in the concept behind the film than in its actual content. The intention here was obviously to deal on a different level with the Holocaust and what it represented, without going back to images that have gone stale from too much exposure. But what he has to propose instead, as visually imaginative as it may be, is no equivalent whatsoever to the real thing and fails to convey the same impact of the horrors of that period.

As for Tsili, she represents not one but all women survivors - therefore there are two of them in the film and the voice of a third, Lia Koenig, the doyenne of the Hebrew theatre these days, for the closing sequence. Her reading of the Appelfeld text is one more reminder that some authors need no adaptations, everything they wanted to say is there, in writing, cinema has nothing more to offer.

Both Adler and Olinski, in the forest scenes, look rather lost and disoriented, frightened animals trying to survive the best they can. But the Holocaust barely registers through all this, even if a warlike panorama of sounds accompanies the proceedings all through. War is one thing, the Holocaust a completely different one.

Still, there is much to be enjoyed. There are Giora Bejach’s powerfully suggestive images, Sara Adler’s unruly mane blowing in the wind, Alexej Kochetkov’s eloquent violin soliloquies and finally the explosion of a full scale symphony orchestra, courtesy of Amit Poznansky, providing the film’s real climax.

Screenplay: Amos Gitai, Marie-Josee Sanselme based on the novel by Aharon Appelfeld