UFO In Her Eyes 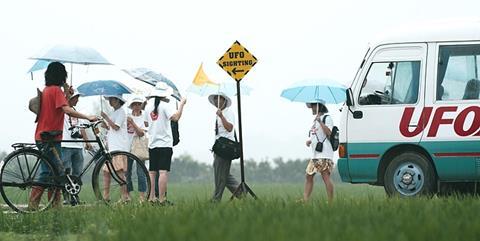 An exquisite adaptation of her own novel, London-based Chinese director Guo’s film is a triumph of visual style. Few artists are as accomplished with both word and image. Michal Tywoniuk’s graceful cinematography (colour and black and white) is at the service of her dark satire with twin targets: the rigidity of a now anachronistic Communist ideology and the new capitalism that has thrown the system into a free-form chaos, with as little regard for individual rights as Maoism.

Guo has fun with her critique of the rapid transformation of Chinese society.

In spite of the film’s formal wizardry—Mocky’s music is an enticing blend of traditional Chinese folk music and modern abstract compositions—its projection prospects will most likely be limited to festivals, museums, and edgy arthouses. If distributors are willing to take a worthwhile gamble, the humour that accompanies Guo’s sharp scrutiny and aesthetic panache could make it more palatable for a larger arthouse market accustomed to straightforward, sober Chinese films.

The structure is elliptical, starting out with a swooping shot of the verdant mountains adjacent to Three-Headed Bird village, the scene ending with a shot of Kwok Yun (Shi Ke), a single peasant who works in the local mine, making love in the grass with   heady Headmaster Lee (Z. Lan), whose obese wife provides any of the film’s comic moments. Possibly the result of post-coital bliss, Kwok Yun stumbles upon a small crystal-like rock on the way home and falls, literally, into a euphoric frenzy, in which she mistakes the innocuous stone for a UFO.

As if that were not enough for one afternoon, she encounters an American entrepreneur, Steve Frost (Kier), who has been bitten by a snake. She takes him home to mend his wounds. The meeting with Frost is no coincidence in Guo’s scheme of things: The opportunistic village Chief Chang (a funny Mandy Zhang) channels Kwok Yun’s vision into a bustling tourist trade and favours from the government, so that these crass new endeavours are linked to American capitalism, in fact, to globalization. (A drunken Kier’s atonal rendition of “Wild Is the Wind later in the film is hilarious.)

The film ends with a reverse aerial survey of the gorgeous landscape, just after Kwok Yun has run away from her lavish wedding to the now-divorced teacher (“an illiterate in alliance with an intellectual,” says Chief Chang, who has arranged it for her own political gain) with her real object of desire, the handsome, unnamed mute migrant (Y. Peng Liu), a bicycle repairman.

The soft-spoken Kwok Yun is a tabula rasa amidst insurmountable conflicts - local labourers stage a riot against developers representing an interloping mobile phone company - but the supposedly “subversive” bike man serves as the knowing witness, a solo silent chorus.

Guo has fun with her critique of the rapid transformation of Chinese society. New enterprises pop up, such as a UFO monument, a five-star hotel, a forum on how to become rich quickly, and a renovated hi-tech office for Chief Chang, but she occasionally goes over the top with the kitschy targets. In fact, trimming 20 minutes off these scenes would strengthen the film.

A self-proclaimed surrealist, Guo connects disparate entities, for example a close-up of an earthworm adjacent to a shot of a meeting in the village. She takes the spectator on delightful tangential detours. Even though the film has an ending, sweet if predictable, the process is of more interest to her than closure.