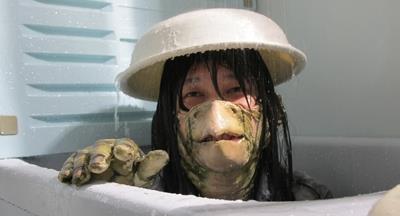 A 35-year-old female, Asuka (Masaki), who works in a provincial fish factory where her aggressive boyfriend, Hajime (Yoshioka), is the manager, provokes her colleagues to break into (bad) song and dance when she insists on taking one small living creature back out to the sea, only a few meters away. They sing “Old Woman,” which sets the stage for her journey to take the fish to water, where she sees standing, eating a cucumber, a kappa: a mythological sea creature with a human form but a bird’s beak and a tortoise shell back. This kappa turns out to be a transformed 17-year-old ex-boyfriend, Aoki (Umezawa), who drowned when they were students. She is now twice his age, the “old woman” of the song.

Imaoka is a veteran of pink films, Japanese soft-core pornography, and the overuse of mediocre sex scenes keeps the project within the boundaries of the genre.

Underwater Love (Onna no kappa) slides downhill at a fast rate. It is intentionally kitsch: the boy’s mask and arms are patently false, cheap, ill-fitting vinyl. His penis will prove to be monstrous, something like a croquet mallet encased in clear plastic. That his eyes and upper face are completely human is illogical but evidently of no significance in Imaoka’s vision, at least as manifest in a film shot in five days.

Imaoka is a veteran of pink films, Japanese soft-core pornography, and the overuse of mediocre sex scenes keeps the project within the boundaries of the genre. He has said it is a fusion with the Japanese teen musical, and it is, except that the badly lip-synched songs with insultingly worded lyrics barely meet the basic requirements. That the kappa is a non-human adds an element of the science-fiction genre, but do not expect the intelligent overview of even a Godzilla.

Even in Japan, young people will stay away from this poor excuse for a movie, if they are even allowed in on account of the obligatory oral sex and intercourse scenes. They are too tame, however, for anyone expecting a more typical pink movie, shoestring-budget projects made for the turn-on. And no science-fiction fan would venture near. There are no foreign prospects, except perhaps for a few festivals obsessed with Asian kitsch.

That Christopher Doyle was cinematographer boggles the mind, unless you take into account the few gorgeous outdoor shots of the water, broken piers, gray skies, and water lilies. The interiors could have been shot by anyone with a film degree.

The embarrassing song-and-dance numbers are not the most unappetising parts of the film. What are, are the overused scatological references, not at all humorous; in fact, ineffective on every count. The old leader of the kappas pulls the famed “anal pearl” out of his backside to enable Asuka to live rather than die, as had been decided, and we watch her painfully cram this huge rock up her derriere to defy her fate. Her subsequent mount of the nearly expired Aoki’s huge member, with the pearl securely in place, is a new low even for unashamedly juvenile movies. It’s sad, and sadder still is that there is a major film festival that would screen it.