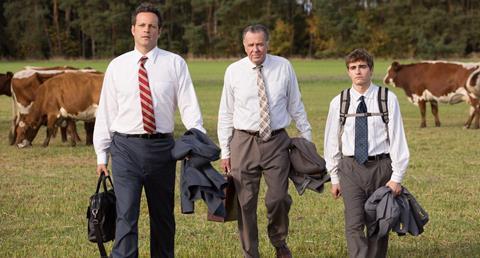 Vaughn’s box office pull isn’t what it used to be - he last starred in the Scott-directed Delivery Man, which topped out at $30.7m in the US and Canada – so expectations won’t be huge when the Fox-distributed Unfinished Business opens in the US, UK and other international markets over the weekend beginning March 6. The cast (including Tom Wilkinson and Sienna Miller) and European locations (Berlin) might be marginal selling points outside the US (where Delivery Man managed $20.5m).

Vaughn’s Dan is a hard-working family man who sets up his own sales operation – dealing in the comically uninteresting metal residue swarf – after clashing with his tough female boss Chuck (played by American Sniper’s Sienna Miller).

Working from a script by Steve Conrad (The Pursuit of Happyness), Scott (who also made French-Canadian hit Starbuck, of which Delivery Man was the US version) doesn’t force the comedy but neither does he give it much punch. Things start to feel aimless as Tim and Mike go off on Berlin adventures and Dan tries to keep in emotional touch with his kids and wife back in the States.

The supporting cast takes some of the comic weight off the always likeable Vaughn’s shoulders. But Wilkinson’s character is too sad-sack to be really funny and Franco’s verges on the mawkish. Miller’s character adds some spark but she has to share villain duties with another slick executive (played by James Marsden, from The Best of Me). British name Nick Frost (Hot Fuzz) only gets a few brief scenes in which to do his comic thing as an unhappy mid-level exec.