Upside Down: The Creation Records Story 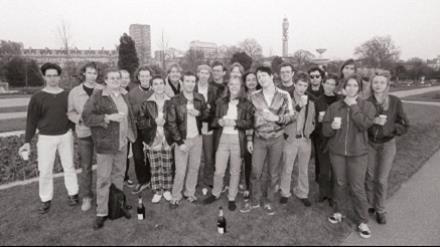 Upside Down: The Creation Records Storycharts the rise and fall of Britain’s legendary indie label; sounds signed from the early 1980s group Jesus And Mary Chain through to the worldwide phenomenon that was Oasis, with standard-issue rock n’ roll-style booze and drugs and breakdowns along the way.

Interview footage is shot in faddishly-angled black-and-white, with concert and video footage and some still shots fleshing out the yarn.

While it takes some time to find its feet, and many of the bands dealt with have long-since ceased to be household names (if they ever were), Upside Down largely works as a rock yarn, the UK’s scaled-down answer to last year’s Burning Down The House: The Story of CBGB.

Directed by Danny O’Connor, Upside Down bills Creation Records as “the UK’s most inspired and dissolute label”, playing up the excess of its founder and the leading voice on the film, Alan McGee.

Starting out in Glasgow with the JAMC and moving on to My Bloody Valentine and Primal Scream, Upside Down’s appeal rests largely on his colourful personality, although he’s not as outrageous (at least, onscreen) as the film seems to think he is. Upside Down largely glosses over the specifics of his addictions and breakdown, making much reference to “partying like drug monkeys” without truly managing to convey the insanity it intimates. You probably had to be there.

The nature of most of the bands and the film’s milieu – The Television Personalities, Teenage Fanclub, Glasgow and Hackney – would seem to restrict the demographic to UK audiences of a certain age, but Oasis, complete with frank footage from Noel Gallagher, may well widen Upside Down’s cable TV net.

Culminating with Oasis’s spectacular concert at Knebworth, the film does a neat full circle – the JAMC started the label off, and they were Creation’s final release a decade ago. Interview footage is shot in faddishly-angled black-and-white, with concert and video footage and some still shots fleshing out the yarn.

Upside Down reminisces about the label’s headquarters in Hackney, where “every time you went to Creation for a meeting you went prepared for a weekend out”. Some live footage might have helped convey the atmosphere better, but O’Connor has worked hard around this problem to build momentum towards the label’s eventual, though inevitable, demise.