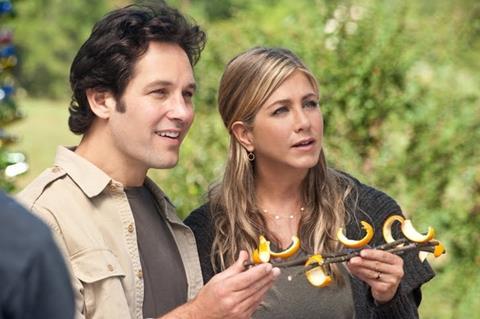 Cultures clash – or, more accurately, lightly brush against one another – in Wanderlust, a mildly amusing let’s-go-live-with-hippies comedy that never finds much inspiration from its mediocre premise. Paul Rudd and Jennifer Aniston are fitfully funny, but this R-rated laugher badly miscalculates exactly how hilarious nudists, hallucinogens and free love really are.

Rudd and Aniston each have their amusing moments coping with the commune’s weirdness.

Wanderlust opens in the US on Friday, when it will benefit from being the only mainstream comedy in the marketplace. Aniston is coming off two straight $100-million domestic releases (Just Go With It and Horrible Bosses), and Rudd has proved to be a sturdy – if not exactly explosive – marquee name of late. But the assumption is that lacklustre reviews and word-of-mouth will dampen theatrical prospects, even if the film manages to lure some of the date-night crowd away from The Vow.

Directed by David Wain (who previously helmed Rudd in Role Models), Wanderlust introduces us to happily married New York couple George (Rudd) and Linda (Aniston). They’ve just purchased a pricey (but tiny) condo in a posh section of Manhattan, but they realise they can’t afford it after his high-paying job is terminated. Rather than work for his obnoxious brother (co-writer Ken Marino) in Atlanta, George and Linda decide to spend some time in a rural commune that preaches a relaxed mindset that’s the exact opposite of their frantic New York lives.

At first, Wanderlust promisingly recalls Albert Brooks’ 1985 comedy classic Lost In America, in which an upwardly-mobile couple elect to drop out of the rat race, only to learn how ill-equipped they are to face such an existence. Unfortunately, Wanderlust doesn’t do much to play up George and Linda’s fast-paced New York life, which makes their decision to join the laidback commune uninteresting from a comedic perspective.

Instead, the filmmakers opt to base most of the humour on the oddballs within the commune, a choice that has diminishing returns when it becomes clear that there’s no one in the group who’s particularly outlandish or shocking in his or her hippie attitudes. (While he’s not a terrific comic construction, at least the commune’s leader, as played by Justin Theroux, is a consistently funny parody of a condescending, tree-hugging free spirit.)

Whereas Wain’s Role Models took advantage of its R rating to deliver rude, profane laughs, Wanderlust doesn’t even have the good sense to be obscene fun, its occasional nudity and sexual talk failing to make much of an impression. As a consequence, the film’s seemingly risqué surface does little to hide a conventional plot in which, predictably, George convinces Linda to give the commune a try – only to discover that he hates it, while she finally finds her purpose in life.

Rudd and Aniston each have their amusing moments coping with the commune’s weirdness – Rudd in particular is an old pro at the slow burn – but the bottom line is that these aren’t funny characters and their insignificant romantic problems don’t make them empathetic. Theroux has a ball as the pretentious, charismatic leader, but several of his fellow hippies (played by Malin Akerman, Kathryn Hahn and Lauren Ambrose) are one-note bozos that don’t generate many chuckles. When George starts to get a hankering to put some distance between himself and these people, you more than understand the impulse.