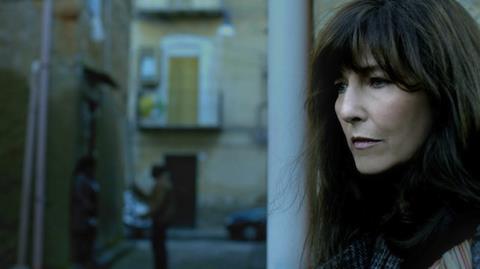 War Story is a dense and taut drama, a study on post-traumatic stress disorder that at its best is strikingly tense and heavy with sadness. It succeeds best when simply centered on Catherine Keener’s haunted veteran photojournalist who seeks refuge in Sicily a few days after having been released from captivity, but when it tries to expand its core story fumbles as it tries to tie strands together.

War Story is a jagged and moody film, elegantly told but perhaps too mournful for its own good. But it is blessed with a suitably haunting and haunted performance by the ever-impressive Catherine Keener.

Director Mark Jackson received much acclaim for his 2011 debut feature Without – a similarly tense and thoughtful drama – and while War Story is perhaps more ambitious in terms of backdrop and cast, it shares the same interest in personal drama.

The film opens with Keener’s Lee trying to escape press attention. She has just been released by a faction from a place initially unknown (we later assume it is Libya), but rather than returning home she looks for somewhere to recover.

Holing up in the same room and in the same hotel as the last time she stayed in Sicily she cannot sleep; paces the room; sneaks down to take wine and food from the kitchen at night and is haunted by the fact that her partner died in captivity. She is still battered and bruised from her experiences – both mentally and physically – but gradually gathers the energy to walk the city streets.

There she encounters a young Tunisian woman, Hafsia (Hafsia Herzi) whom she is convinced that she looks exactly like a young woman she had photographed before. She embarks on an unlikely friendship, with Lee eventually convinced that both should try and move on.

She also goes to meet her former lover and mentor (a fine cameo from Ben Kingsley) who is compassionate and helpful to her, but she is still largely unable to open up about what happened to her.

Keener is excellent as the haunted and guilt-stricken woman struggling to pull her life back together, and the scenes of her alone in the hotel tormented by memories and demons of her own are the best part of the film. Her link to Hafsia is less convincing, with the film struggling to deliver the notion that her attempt to ‘save’ Hafsia helps deal with her current torment.

But cinematographer Reed Morano does a fine job in creating a jagged atmosphere, which is aided by moody music from Dave Eggar, Chuck Palmer and Amy Lee. War Story is a jagged and moody film, elegantly told but perhaps too mournful for its own good. But it is blessed with a suitably haunting and haunted performance by the ever-impressive Catherine Keener.