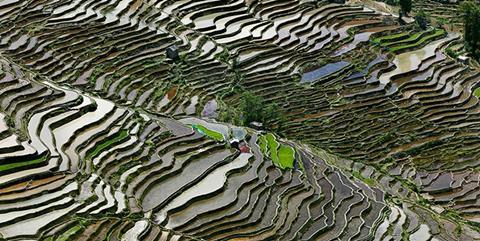 After their impressive joint venture Manufactured Landscapes (2006), director Jennifer Baichwal and art photographer Edward Burtynsky reunite for the thoughtful and at times striking Watermark, a pertinent look at themes and issues around water.

There is no denying how well Baichwal and Burtynsky dovetail together, and combine to deliver a striking visual document.

The film tags along with Burtynsky as he photographs for his art book Water, and while the issues it raises are undeniably important – we are talking about our most important resource here – the film doesn’t quite capture the same inspirational artistry of Manufactured Landscapes. The reputation of Baichwal and Burtynsky should help draw distributor attention, but targeting support in the fine art world may be a little harder this time round.

The beautifully shot Watermark dwells on a series of striking watery vistas – from the Ganges and Mexico’s Colorado River through to dams in China and step wells in Rajasthan – with Baichwal’s impressive use of scale reflecting Burtynsky’s photography, resulting in a film that revels in its striking imagery. There is no voiceover to reinforce some of the contradictions (Las Vegas hotels and their lush waterfalls, all in the middle of a desert for example) or drive home some of the darker facts, but then the film relies on its visual drama to make its points rather than hammer them home with voiceovers.

While Manufactured Landscapes was more about the depth and scale of Burtynsky’s photographs, this new film blurs the line far more between photographer and his images and a filmmaker shooting magnificent vistas, though at its heart it is about the book, with footage of Burtynsky mulling over proofs and shots of the printing presses delivering some finished pages.

There are times when it would have been nicer to have had more of the background to some of the spectacular imagery, but there is no denying how well Baichwal and Burtynsky dovetail together, and combine to deliver a striking visual document.