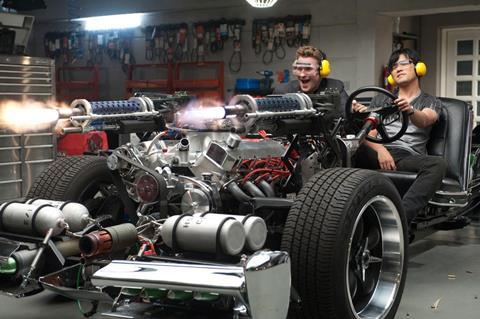 Michel Gondry’s latest, currently playing in 43 territories, has hit most major openings but reaches South Korea and Italy this weekend, Russia the next and Brazil on Feb 18.

China Film’s action-drama Shaolin debuted in second after opening in five territories for $14.4m and a screen average of $21,567, the vast majority of that haul coming from China. Jackie Chan and Andy Lau star in the Benny Chan-directed title about feuding warlords.

Warner’s Hereafter leapt from 16th to third in its third week, grossing $13.7m from 1,868 screens at an average of $7,318 in 29 territories. Clint Eastwood’s fantasy-drama hits Germany and the UK this weekend, Scandinavia next weekend and Japan on Feb 19.

Fox’s awards contender Black Swan debuted in fifth place, making $11.4m in only nine territories. With a host of major openings still to come, the ballet-drama looks set for an impressive international total.

Seventh-placed The King’s Speech, which has already grossed $50m, is another drama posting impressive totals and is yet to open in France, Germany, Italy, Russia and Brazil.

RAI Trade/01 Distribution scored its best-ever first weekend opening in Italy with comedy Qualunquemente. The latest in a succession of hot local comedies, the Fandango-produced title about a sex scandal-ridden politician scored $8m and a sumptuous $14,460 screen average.