What We Do In The Shadows 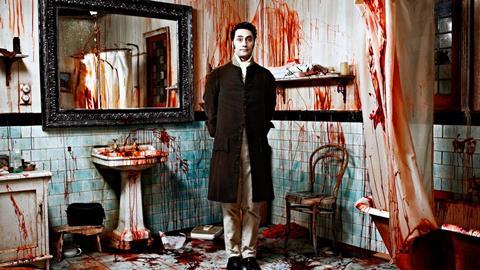 A New Zealand mockumentary about four vampires sharing a squalid house in Wellington might seem an unlikely international prospect. Fortunately, the writer/directors behind this blood-soaked nonsense — Taika Waititi and Jermaine Clement — have significant form on the world stage. Their making-a-doco jokes and Gothic Horror tropes here make a genial, frivolous mix.

While unlikely to appeal to a general audience, this is a cinch for Conchords fans, documentary buffs, horror movie nuts, and all lovers of daffy, issues-free humour.

Waititi’s breakthrough feature Boy (2010) is the top-grossing Kiwi feature of all time; Clement is one half of the Flight Of The Conchords comedy duo with a high profile in Britain and North America. What We Do In The Shadows premiered at this year’s Sundance, attracting some critical shrugs among the mainly geeky acclaim: it’s that kind of movie. A local release begins in early September.

Proudly beginning with a retro ‘New Zealand Documentary Board’ caption, the alleged doco features much tightly edited handheld footage in the rooms, cellars and cupboards of the vampiric squat intercut with formal seated interviews.

Inevitably recalling the mock horrors of shared 1980s living in Rik Mayall and Ben Elton’s The Young Ones, these four sharers live in squalor, with scheduled chores neglected and unwashed dishes piled to the high ceiling. Their ages vary greatly. Viago (Waititi) is 379, an 18th century dandy; Vlad (Clement) is 862, a medieval torturer; Deacon (Jonathan Brugh), a big fan of the Nazis, is a mere 183; the unspeakable and non-speaking Petyr (Ben Fransham), an undead ringer for Nosferatu, is 8,000 years old but ever-ready for fresh blood.

A skimpy plot emerges as we meet Jackie (Jackie Van Beek), a local housewife with eternal ambitions, who acts as their procurer. On after-dark incursions into Wellington, the housemates court trouble with a pack of untransformed werewolves swaggeringly lead by Conchords regular Rhys Darby. Like The Young Ones, this is a masculine world.

There is much spurting, drenching blood and some excellent moonlit transformations into flying bats. The full-on special effects, it seems, owe much to the friendship and availability of major talents linked with nearby Peter Jackson’s The Hobbit.

The tight 85 minutes has been ruthlessly pruned from many hours of improvisations. While unlikely to appeal to a general audience, this is a cinch for Conchords fans, documentary buffs, horror movie nuts, and all lovers of daffy, issues-free humour.