When Kevin Feige met the press

Marvel Studios chief Kevin Feige looked like he had the world in his hands when he strolled on to the stage at El Capitan Theatre on October 28. 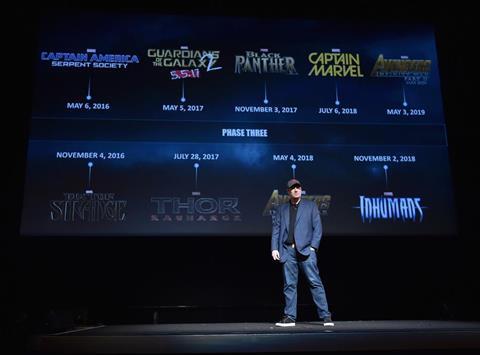 The producer’s grin was broad but nothing compared to the beams of delight that shone out from the assembled throng of press and handpicked fans.

In a one-off Hollywood event that made Marvel’s summer Comic-Con panel look positively anaemic (from a news standpoint, you understand – it would be impossible to ‘out-glam’ the A-list parade that assembled that day in Hall H), Feige unveiled the studio’s plans for Phase 3.

See the news story for details. What follows are paraphrased questions from reporters in an exclusive Q&A session that came after the presentation.

Tell us about Black Panther’s role.
Kevin Feige: “Black Panther is a big part of [Captain America] Civil War. We will meet him for the first time in Civil War in costume.

How will Civil War fit in with the comics?
KF: “This is the Civil War of the cinematic universe: inspired by the comics but we have a different continuity going… Governments of the world will decide they need to have some oversight of the superheroes. It’s not about the wearing of a mask [because the identities of the cinematic superheroes are known]; it’s more about who reports to whom.”

Regarding Guardians Of The Galaxy 2, will Cosmo [the Space Dog] come back? Will Groot be big or small? Where’s the Collector? What’s that [Howard The] duck doing?
KF: All to be decided.

Will there be a stand-alone Hulk film?
KF: “We will see. We would love to do it… but right now Hulk will be appearing with his friends in all the other films.”

Tell us about Phase 4
KF: “We are not going to talk specifically about the storyline of any of those films. To talk about who will be in what movies is a spoiler, so let the rumours continue.”

Will the Russo Brothers direct Infinity Wars?
KF: No comment

Will Sony’s Spider-Man join the universe?
KF: No comment.

You’ve announced the first black and female lead superheroes in Marvel Studios movies? Will we see black, female or ethnic minority directors of a Marvel Studios movie?
KF: “We do what we always do, which is looking for the best writers and directors possible. We’re certainly meeting with a lot of people.”

How do the TV and Netflix series tie in with the movies?
KF: “My end of things is exclusively the features.”

When will we first see the Inhumans?
KF: “Where they fit into the universe you may find out sooner that you are expecting. There are maybe Easter eggs starting before you know it.”

Why no stand-alone Black Widow movie?
KF: “Black Widow could not be more important as an Avenger… the plans we have for her throughout the rest of the Avengers saga are very, very big.”

Any news on the Runaways?
“Runaways is an awesome script that exists in out script vault… We would love to do something with the Runaways some day.”

How do you deal with the congested release schedule?
KF: “My general feeling is, ‘Let’s stick to our plan and keep doing what the audience is telling us is right.’ In terms of the dating that’s why we’re planting flags early – to mark territory.”