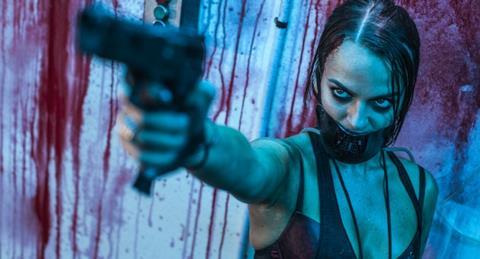 The zombie movie has been one of the growth industries in the film business in recent years, often getting pretty sophisticated (such as 28 Days Later or World War Z), but it is also a genre that in the right hands works best in its down-and-dirty low-budget origins. And that is exactly what Fantastic Fest offering Wyrmwood has to offer…good old-fashioned body-chomping, head-shooting, zombie action.

At heart the film is a fearlessly fun and bloody B-movie that mixes up sci-fi-style action with zombie mayhem and comes up with something grungily enjoyable and a smart bit of late-night genre fun.

The film’s Antipodean origins hint at links to George Miller (Mad Max-style features strongly) and Peter Jackson (from his Bad Taste days), but at heart the film is a fearlessly fun and bloody B-movie that mixes up sci-fi-style action with zombie mayhem and comes up with something grungily enjoyable and a smart bit of late-night genre fun. The film premiered at the Austin festival and has also been picked up for international by the UK’s Altitude Film Entertainment.

Made by the Australian filmmaking team of Kiah and Tristan Roache-Turner, it follows most of the traditional zombie film rules but also attempts to add some variations on the theme, adding in military mayhem, scientific experimentation and supernatural silliness. It wears its low-budget origins as a badge of honour and succeeds simply as being a well-made genre flick with some nice visual quirks.

The film starts out in a little freewheeling fashion, though the premise is familiar – the dead have come life…and they are hungry. Mechanic Barry (Jay Gallagher) has lost his wife and daughter in the mayhem, and aims to try and find his sister Brooke (an impressive Bianca Bradey). But she has been found by the military and caught up in some strange scientific experiments that give her some rather nifty powers.

The zombies are of the old-fashioned slow-moving variety (though there is a nice twist), and while the effects are pretty much by-the-numbers the film has some smart plot developments that leave the audience wanting more and astutely leaves things open for a sequel. Quite whether we need a Wyrmwood 2 is debatable, but it is clear that the Roache-Turner brothers are a genre talent to keep and eye on.