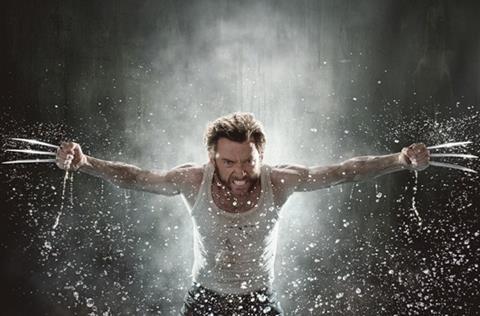 An attempt to extend the Marvel franchise which has netted Fox a cool $1.1bn to date in worldwide theatrical revenues, X-Men Origins: Wolverine turns back the clock to focus on Hugh Jackman’s character of Wolverine in a film also co-produced by the actor and shot in his native Australia and New Zealand. The question hanging over this ambitious project is whether X:Men: The Last Stand played out the franchise in 2006 for mass audiences and if this will bat outside the fanbase. This is the first of 2009’s big tentpoles; expectations will be geared up for an opening weekend of anything up to The Last Stand’s $102m bow (44 percent of its ultimate gross).

While Wolverine will undoubtedly debut well, the plot’s inherent weaknesses – at no point does Wolverine himself ever appear to be in peril – mean word of mouth will not be as spectacular as Fox needs to equal the overall performance of the last two X-Men films and this efficient blockbuster could be looking at returns around the original X-Men level (2000; $296m worldwide) before the buzzy Star Trek starts nipping at Wolverine’s heels mid-leap on May 8.

Apart from battling the leaden inevitability that Wolverine himself will survive whatever assorted X-Men and G-Men throw his way (apart from the fact he’s indestructible, he does appear in three chronologically sequential films), X-Men Origins: Wolverine, under the direction of Tsotsi’s Gavin Hood, veers noticeably in tone throughout.

Kicking off brutally with the introduction of military mutants Team X – the film looks at this point as if it should have an R-rating – it then abruptly segues into quasi-camp romantic sequences with a bare-chested, super-coiffed Jackman working as a lumberjack in Canada although, frankly, he could try out for the Village People. This is followed by the inevitable “we’re going to make you indestructible but first we have to destroy you!” section of a Marvel adaptation (“will he survive?” gasps a nurse, presumably one of the 20 percent of Americans who hasn’t seen an X-Men film).

That X-Men Origins: Wolverine rallies by the end to provide a thrilling finale is thanks largely to a pumped-up Liev Schreiber, gratuitously evil as Wolverine’s bad-ass brother Victor/Sabretooth. The film’s actual uber-villain, Deadpool, barely registers against the epic battle between these two siblings, not entirely credibly explained but fun nonetheless. This feels fresh in this Marvel canon, a genre that is beginning to feel structured-by-rote and could ultimately restrict audiences to the core demographic with breakout potential for the Australia crowd which rallied to deluxe shots of Jackman’s rippling chest.

As with any X-Men film, the plot is wide here and the stars are many. The prologue and opening credits briskly establish Jackman and Schreiber as James/Logan and Victor, brothers with special, animalistic powers in Canada’s Northwest Territories in 1845. Never growing old, the mutants go on to fight in wars from Europe to Vietnam before being recruited by Col William Stryker (Huston) to be part of the vicious Team X, which also includes Agent Zero (Henney), teleporter Wraith (will i. am, good), telepathic manipulator of electricity Bradley (Monaghan), Wade Wilson/Deadpool (Reynolds) and the Blob (Durand).

When James/Logan, disgusted by the band’s brutality, leaves Team X on assignment in Lagos to don a plaid shirt and live in the Rockies with Kayla (Collins), Stryker and Victor come after him with everything they’ve got. There’s much more plot and many more mutants in X-Men Origins: Wolverine, but the only real one to make an impression is Taylor Kitsch in his big-screen debut as Remy LeBeau/Gambit.

Hood, moving far beyond the scope of Tsotsi, just about keeps this all under control, and it’s certainly a beast of a film to tame and one which is constantly teetering on the edge of becoming a fully-fledged vanity project for Jackman.

X-Men Origins: Wolverine probably takes too long flitting around between plot strands before it finally settles on one, and all of them are paper thin, but it just about scrapes through as being enjoyable, loud, banging, daft multiplex entertainment awash with location work, none of it authentically where it’s supposed to be, but all looking nice enough. Will it kick off an Origins series? Only the opening weekend will tell. This is the start of summer 2009 and the big guns start firing from here.