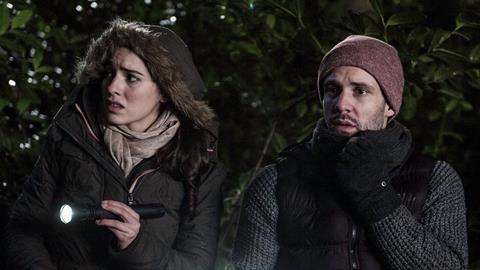 American student filmmaker Georgia (Melia Kreiling), a wannabe cryptozoologist, persuades her boyfriend Matt (Nick Blood) to spend a holiday on Exmoor, searching for a big cat that has purportedly been sighted living wild, intent on making a documentary.  Experienced hunter Fox (Mark Bonnar) joins the expedition and, after ominous encounters with local troublemakers and a drug addict who claims to have escaped from the beast, the trio find a dumping ground littered with corpses.  However, some of the dead women have their hands tied – and Fox reveals that he is actually hunting an even more dangerous game, an unsuspected serial killer.

A commercial (if silly) touch is that the predominantly female prey of the beast demonstrate a tendency for getting clothes strategically ripped to reveal their underwear.

Xmoor, which was shot in Northern Ireland rather than Devon, sets out to explore interesting literal and figurative territory, showing off picturesque wilderness while drawing on ‘beast of Bodmin’ or ‘moorland puma‘ legendry that dates back at least to The Hound of the Baskervilles.  However, the film lapses somewhat when it brings on a less fearsome, more familiar menace – a masked maniac (James Lecky) in a white sterile suit.

Though not an entry in the currently-proliferating field of ‘found footage’ horror, the fact that it’s about foreign clods who hump filming equipment into a hostile locale and spend much of their time squabbling draws so much from the cycle that it falls into several of the traps that have worn out the form and risks being confused with such recent British genre efforts as A Night in the Woods, The Hollow and The Borderlands.

Writer-director Luke Hyams springs several decent plot reversals and twists – the late-in-the-day involvement of the murderer’s one-eyed tagalong child (Jemma Obrien) complicates the finale, and the beast comes creeping back in as the possibility is raised (‘they were all alive when I left them’) that the killer has been working in collaboration with something more animal-like (a plot element resolved by a final image on a smashed monitor no one is around to view except the audience).

The cast (especially the charismatic and grizzled Bonnar) do what they can, but the characters frequently have to be needlessly argumentative or stupid in order for the story to keep running and there’s considerable faffing with the old business of dropped or discarded weapons and victims who fail to turn the tables completely and so prolong their torments.

A commercial (if silly) touch is that the predominantly female prey of the beast demonstrate a tendency for getting clothes strategically ripped to reveal their underwear. The film had its world premiere at London’s FrightFest event.