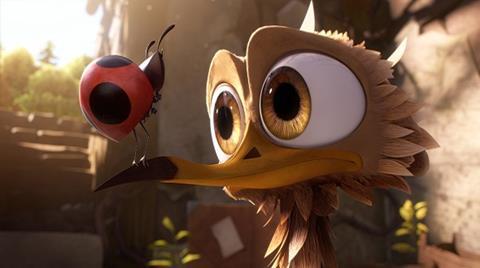 Yellowbird is the first feature animation from the independent French studio TeamTO which has, until now, focused on children’s television. Together with Haut Et Court, TeamTO has assembled a cast of international animators and voice talent to fly Yellowbird, which world premiered at the London International Film Festival, into the increasingly-sophisticated arena of children’s feature animation.

Yellowbird was designed by Benjamin Renner (Ernest & Celestine) and, while boasting some spectacular aerial shots and bird’s-eye-vistas, comes across artistically as a standard, sweet, but by-the-book computer animation.

Focusing on an orphaned young bird who must find the courage to lead a migration to Africa, Yellowbird has been deliberately formatted for international travel. Aimed at a very young audience, which will immediately, and unfavourably, compare it with Rio, it has the stiffness of European cartoons such as The Enchanted Forest, Animals United or Valiant, as opposed to the loose craziness of an Aardman production. It’s a timid approach, and twitchers will probably look to find Yellowbird working best on the holiday TV schedules.

Written by Antoine Barraud, with assistance from Cory Edwards (Hoodwinked) for the international version, Yellowbird Is directed by Italy’s Christian De Vita, who was lead story artist on Fantastic Mr Fox and Frankenweenie. With the CG Yellowbird, he centres the action around an orphaned, ratty-looking yellow bird (voiced by Seth Green), with huge Japanese-anime-style eyes, who is afraid to come out of the house where he his tended to by the jive-talking Ladybug (Yvette Nicole Brown).

When a flock of colourful, blue (but otherwise-unidentified) migratory birds crashes into Yellowbird’s life, he somehow finds the courage to lead them on their annual migration to Africa. This involves both the early death of a beloved parent (a la Bambi), and Yellowbird being deceitful to his new friends. Now he has to find his courage as their voyage becomes ever-more derailed – the courage to lead them, but also to tell the his new friends the truth.

Travelling from Paris through to the Netherlands, hopping on a sinking ship and, ultimately, arriving in Greenland (where the landscape calls to mind the Ice Age series), Yellowbird also delivers some small-scale social messages about the need to protect the environment, a standard rallying cry for children’s animation.

Yellowbird was designed by Benjamin Renner (Ernest & Celestine) and, while boasting some spectacular aerial shots and bird’s-eye-vistas, comes across artistically as a standard, sweet, but by-the-book computer animation. There’s a lively score, although the musical sequences don’t feel particulary organic to the plot. Other voice cast includes Danny Glover, Jim Rash and Dakota Fanning, as the love(bird) interest Delf. SC International will take this into the international marketplace, while Heaut Et Court retains French distribution rights with Studio Canal on board for home video there.