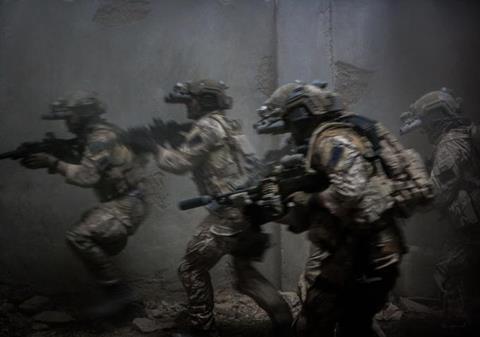 The US government’s 10-year search for Osama bin Laden ended in success not because of lofty speeches and soaring heroics but, rather, hard work, intelligence and sheer tenacity. That’s the case director Kathryn Bigelow makes rather magnificently in Zero Dark Thirty, a taut, methodical retelling of the methods that led to the terrorist’s killing in May 2011 at the hands of American Navy SEALs. As a follow-up film to her Oscar-winning The Hurt Locker, this true-life thriller again finds Bigelow investigating the toll taken on those engaged in warfare, but her commitment to a dispassionate, stripped-down approach results in a film whose impact sneaks up on you, leaving you blindsided by its visceral final reels.

Daringly, and successfully, Bigelow and Boal resist certain tendencies of films of this kind, eschewing the sleek, sophisticated tech-speak we’re accustomed to from government operatives in the Jason Bourne movies.

Zero Dark Thirty opens in limited release on December 19 domestically before expanding across the country early in the New Year. Bigelow’s connection to The Hurt Locker will attract discriminating audiences, as will the topical subject matter and rising star Jessica Chastain, who serves as the movie’s emotional centre. This Sony film (in the US) should do well with critics and Academy voters alike, but those expecting a simplistic, slam-bang action movie may be turned off by the thoughtful build-up that eventually gives way to a riveting ending in which the US executes its risky assault on bin Laden’s compound. But in a season when expert adult dramas like Argo and Lincoln have found box office success, Zero Dark Thirty could become a sleeper hit.

Based on extensive research, the movie (written by Hurt Locker scribe Mark Boal) stars Chastain as Maya, a young CIA agent assigned to the Middle East in the wake of the September 11 attacks who is unprepared for the lengths that her colleagues (especially Jason Clarke) will go to extract information from their prisoners. But as the years go by and her dedication to find bin Laden intensifies, she becomes a key player in uncovering the evidence that will result in his eventual killing.

Bigelow’s new film can be seen as a companion piece to The Hurt Locker, which examined how a cocky bomb disposal expert became so infatuated with the danger of his job that he began to lose touch with reality away from a war zone. The danger isn’t as constantly present in Zero Dark Thirty — although Maya and her colleagues do face several life-and-death moments — but this allows the filmmaker to show how the slow crawl of time eventually eats away at Maya, causing her to be tougher and more persistent in her quest to find bin Laden.

Not unlike David Fincher’s Zodiac, Zero Dark Thirty subverts genre expectations, forcing us to be at times as frustrated as the characters as their years of pursuit often lead to dead ends — not to mention growing concern that all their effort will be for naught.

Daringly, and successfully, Bigelow and Boal resist certain tendencies of films of this kind, eschewing the sleek, sophisticated tech-speak we’re accustomed to from government operatives in the Jason Bourne movies. (Blessedly, the filmmakers also resist the temptation to give Maya and her co-workers’ intricate back-stories to explain their investment in this mission.) Instead, Zero Dark Thirty portrays the CIA and the military as consisting of dedicated, almost anonymous professionals who lack the panache we’re used to from war movies and government thrillers. In this way, Bigelow avoids romanticising their service, simply letting their weary determination be their distinguishing characteristic. This isn’t to say that the film fails to flesh out its main characters — it’s just that Zero Dark Thirty refuses to add artificial emotional stakes to an already-compelling story.

As Maya, the young operative who finds her steeliness (and is reportedly based on a real person), Chastain gives a performance of great depth, although it’s one that isn’t very showy. As the years grind away, the story keeps jumping ahead in time, which runs the risk of making Zero Dark Thirty feel episodic or disjointed, but it’s through Maya’s gradual transformation that the movie establishes an organic through-line.

Chastain showed some inner fire in The Debt as a Mossad agent, but her Maya is a different creature entirely: a no-nonsense operative who has forgone any semblance of a personal life to get bin Laden. (Slyly, the movie hints at her shrinking ethical conflict about doing whatever’s required to bring him to justice in a small scene where she chats on the phone absentmindedly while observing military footage of an enemy target being destroyed.) On occasion, Chastain can overdo Maya’s hard-as-nails demeanour, but she compensates by suggesting that this woman has been so consumed by this decade-long mission that she long ago abandoned social niceties to achieve her goal.

Bigelow has made a career out of directing action-oriented thrillers (Point Break, Strange Days), but the first half of Zero Dark Thirty represents something new for her: a detective story that’s almost a procedural. But her restrained, alert style serves the material well, avoiding any visual gimmicks so as to foreground the laying out of information that will eventually bring bin Laden to justice. Along the same lines, Bigelow avoids politicising her story, tellingly showing President Bush and President Obama only in brief TV clips that the movie’s characters never comment on.

This approach could lead to criticism that Bigelow is, in effect, supporting the use of, say, waterboarding — which is shown in the film — but that would misunderstand her larger point about the lengths in which American intelligence went to find the mastermind behind 9/11. By refusing to editorialise, she allows us to watch these events with an objectivity that forces the viewer to decide for himself about the moral complexities. And while Zero Dark Thirty is beautifully restrained — even the bravura raid on bin Laden’s compound is a model of precise, controlled moviemaking — there’s no question that the film’s final understated image hints at Bigelow’s own complicated feelings about this lengthy manhunt.

On a technical level, Zero Dark Thirty is a marvel, especially in its handling of the compound raid. Incorporating night-vision cameras and seamless special effects, cinematographer Greig Fraser gives the sequence a realism that’s quite extraordinary. Prolific composer Alexandre Desplat produces one of his sparest and most effective recent scores, underlying the tension in key moments without overpowering the visuals. And while Chastain carries the movie, her co-stars are perfectly exact in their small, crucial roles, particularly Clarke as Maya’s mentor who wonders if he should abandon this bin Laden hunt before it kills him — or at least his spirits.