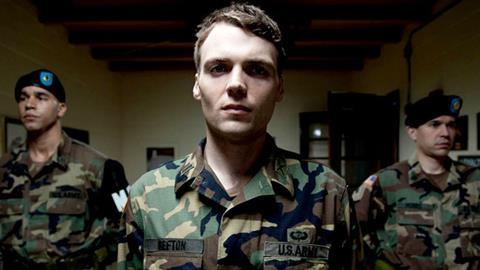 A solidly made though indie wartime drama, Allegiance may well interest veterans and those with a soft-spot for military melodrama though it is unlikely to break-out and its life is very much in home entertainment after its limited theatrical release in the US.

Writer/director Michael Connors creates a good sense of atmosphere and clearly knows his way around the military milieu.

The film bears the unusual distinction that it is “written, directed, produced and financed almost entirely by veterans,” and while this does help give it an interesting edge, it isn’t enough to overcome the rather plodding presentation. Its 2004 backdrop of the Ira war seems rather dated given the changes in US military involvement, and the indie budget means it naturally lacks the big screen drama.

Throw into the melodramatic pot a clichéd ‘tough-as-nails’ military leader (Aidan Quinn as Colonel Howe) and a bitter subordinate (Pablo Schreiber as tough Lieutenant Chambers) and stir in some expected conflict between Reyes and his superiors and you have a film that goes pretty much by-the-numbers.

Writer/director Michael Connors creates a good sense of atmosphere and clearly knows his way around the military milieu, but never manages instill the film with a much-needed sense of dramatic tension despite a solid enough story structure.