The Dead Man And Being Happy 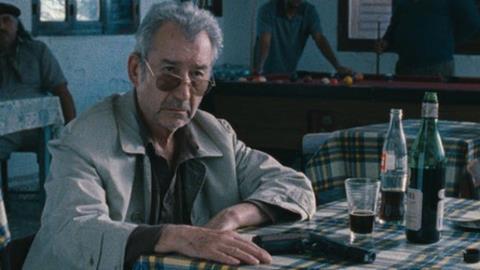 Spain’s Javier Rebollo hits the road out of Buenos Aires in the clunkily-titled The Dead Man And Being Happy (El muerto y ser feliz), a cumulatively charming, whimsical film which will undoubtedly find a niche on the festival circuit due in no small part to the charms of its leading man, Spanish acting legend Jose Sacristan.

Rarely laugh-out-loud, The Dead Man And Being Happy is nonetheless a warmly funny film.

While it’s easily as quirky as Rebollo’s earlier works Lo que se de Lola (2006) and Woman Without Piano (2009), The Dead Man And Being Happy is a much smoother ride, its darkly comic aspects settling into a unique groove despite an extremely intrusive voiceover narration in the first part (a voice which is as unreliable as it is insistent, and is later joined by a second narrator).

Sacristan and the 5,000 kilometres of (mostly-Argentinean) road on which Rebollo and production designer Miguel Angel Rebollo shot the film, often on the hoof, are the two stars of the dryly-humorous show, which, although it won’t be widely appealing, should win over many more fans for Rebollo than the considerably less-pacy Woman Without Piano.

Santos (Sacristan), a Spaniard who emigrated to Argentina, is a mischievous and somewhat dirty 75-year-old man dying of cancer in a Buenos Aires hospital. He buys morphine from an attractive nurse, and, clad in his pyjamas and a grubby mac, and after two stop-offs (one with a prostitute, another with a strange man with green glasses) goes on the road in his old car, affectionately called Camborio.

Santos, it transpires, is - or has been - a professional hitman, and the names of his dead provide an alternative soundtrack to the action. Soon he encounters Erika (Blanco), a lame, forty-something travelling companion, and an easy friendship and eventual love settles in between the two.

Their autumnal drive through Argentina, from the Parana to the Pampas, Cordoba, Salda, Jujuy, and on to Bolivia covers territory in part travelled by films like Bonbon el Perro but never quite so spontaneously beautiful as for Rebollo’s cinematographer Santiago Racaj. Dated hotels, a ruined beach, a mountain spa town and the hissing rain forest provide a living backdrop to Santos’ advancing death.

A few of Rebollo’s stylistic tics can prove wearing: the fey, over-ridingly insistent narration will undoubtedly alienate some viewers, although it does eventually settle down. He plays a little more effectively with the sound, cutting the ambient noise of the film’s first half at strategic moments, and gradually, through occasional bursts of piano, growing the music to full-blown score. Rarely laugh-out-loud, The Dead Man And Being Happy, which premiered at the San Sebastian Film Festival, is nonetheless a warmly funny film.