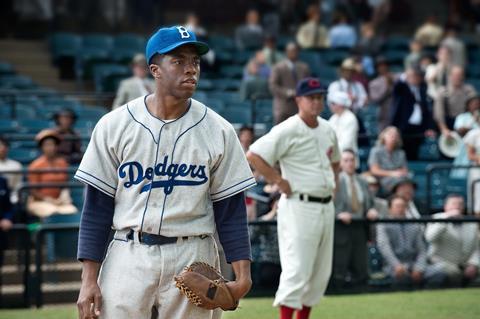 An icon in both sport and the civil rights movement, Jackie Robinson is an important figure in post-World War II US history. Maybe that’s why writer-director Brian Helgeland’s 42 feels almost over-respectful in its solid but rarely inspiring recounting - with relative unknown Chadwick Boseman in the central role - of how Robinson broke baseball’s ‘colour barrier’ in the late 1940s and opened a door of opportunity for generations of black athletes.

Helgeland doesn’t fudge the facts by exaggerating Robinson’s early on-the-field achievements. And he delivers a few quietly powerful moments as Robinson stoically endures the attacks and eventually starts to win over the other Dodgers.

Worldwide distributor Warner will need to work mainly off Robinson’s status as a sporting and cultural hero when it opens the film (whose title was Robinson’s playing number) in the US on April 12, just after the start of the local baseball season and just before the sport’s annual Jackie Robinson Day. In non-baseball playing international territories this Legendary Pictures production will, of course, be a much tougher sell, though Robinson’s historical significance and the presence of co-star Harrison Ford should provide some marketing leverage.

Helgeland (best known for his writing work on LA Confidential and Mystic River) focuses on the three years during which Robinson, who up to then had played in baseball’s ‘Negro leagues,’ was signed by the famous Brooklyn Dodgers and became the first black player on a modern era major league team. As Robinson (Boseman, previously seen in TV series including Persons Unknown and Justified) struggles to endure the hostility and racism of fans, managers and even some of his own teammates, he is supported by his new wife (Nicole Beharie, from Shame) and by the Dodgers’ gruff but decent manager Branch Rickey (Ford).

To his credit, Helgeland doesn’t fudge the facts by exaggerating Robinson’s early on-the-field achievements. And he delivers a few quietly powerful moments as Robinson stoically endures the attacks and eventually starts to win over the other Dodgers. Often, though, the film feels subdued and a little stiff, as if afraid to add too much drama or cinematic style to the historical facts. Mark Isham’s musical score, on the other hand, never misses a chance to pump up scenes with rousing swells of strings and brass.

Boseman (who recently appeared in indie release The Kill Hole) does a capable job in his first big role but neither he nor the script gives much sense of Robinson the man. Ford, heavily made up and padded to resemble the real Rickey, is enjoyable if a bit mannered.