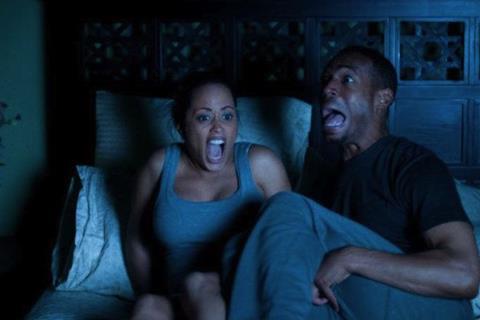 In found footage horror spoof A Haunted House writer/producer/star Marlon Wayans takes comedic aim at Paranormal Activity and its ilk but scores precious few hits. Though the popularity of the target genre might lead to a good opening, it seems doubtful that this will be the start of another big franchise for Wayans, who previously co-wrote and appeared in the first two Scary Movie instalments.

Much of the 80-minute running time is filled with Malcolm behaving like a naughty little boy and Kisha acting the reproachful girlfriend.

US distributor Open Road was probably wise to give the film a wide release this weekend, three months ahead of the launch of Scary Movie 5. Distributors that have bought the film from producer and international sales company IM Global (which also handled international on the first Paranormal Activity) might want to try a similar move with what may in some territories be a tough sell even to its youthful core audience.

Closely following the shape of the first Paranormal Activity (the franchise’s fifth entry is due later this year), the script by Wayans (who also co-wrote and produced 2009 spoof Dance Flick) and Wayans Bros Productions partner Rick Alvarez introduces man-child Malcolm (Wayans) as he’s about to start sharing his house with girlfriend Kisha (Essence Atkins, from US TV’s Are We There Yet?). Unbeknown to Malcolm, Kisha is followed by a demon whose activities - which in the spoof version include smoking weed and shagging - are captured on the couple’s video camera.

Much of the 80-minute running time is filled with Malcolm behaving like a naughty little boy and Kisha acting the reproachful girlfriend. But other characters - among them a racist security expert (Anchorman’s David Koechner), a gay psychic (Nick Swardson, from Jack And Jill) and a prison priest (Cedric the Entertainer) - come in to help sell the un-PC and often predictable gags about sex, race, drugs and farting. All the characters come together for a finale that spoofs that other horror staple, exorcism movies.