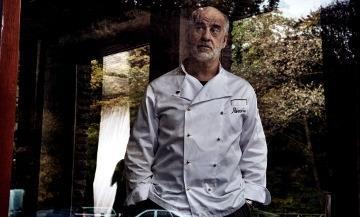 This tense and resonant family thriller about an Italian who has made a new life for himself in Germany is the best kind of European co-production: one whose story fully justifies the territorial outreach, and one that displays a slickness on all levels, from script to soundtrack, that promises a cross-border return on its cross-border investment. Featuring three standout performances – not least by everybody’s favourite Neapolitan actor, Toni Servillo – A Quiet Life is marred only by its overloaded and overlong ending, but this is only a small dip after a gripping ninety minutes.

This is one of those tales that resonates ethically and narratively, mining a seam that leads from Greek tragedy right through to The Godfatherand beyond.

Servillo plays Rosario, a hotelier and restaurateur whose name is spelled out in discreet red neon on the Alpine-style roadside inn that he owns and runs with his German wife Renate (Kohler) somewhere near Wiesbaden. At first we’re not sure what links Rosario with the two young Neapolitan toughs, moody, introverted Diego (D’Amore) and street-smart Edoardo (Di Leva, radiating animal energy) who turn up at the hotel and take a room.

But we know that there are issues between him and Diego, and between Diego and Rosario’s young son Mathias (Sprengler). And it doesn’t take long for us to work out that the pair of young blades are Camorra hitmen, sent by the mob to wipe out a German waste disposal plant manager who is about to sign a contract that will help to relieve the Neapolitan rubbish crisis.

Neapolitan waste is in the news once more in Italy, where 01 Distribution release the film on November 5, and where audiences will immediately understand the subtext of the mission – that the Camorra needs the garbage crisis, as the social unrest it causes plays right into their hands.

Together with Servillo’s cachet and the upbeat critical reaction that followed the film’s Rome Festival premiere, this topicality should see A Quiet Life performing better than most ‘serious’ Italian films on home turf. Abroad, it will need to argue its case, but the primal chords touched by the father-son relationships that the film explores, along with its generally top-drawer production values, should see it notch up a few sales.

Filippo Gravina’s treatment for the film won a prestigious Italian story prize back in 2003, and its easy to see why: this is one of those tales that resonates ethically and narratively, mining a seam that leads from Greek tragedy right through to The Godfather and beyond. It’s cut with a breathless rhythm that doesn’t let up at moments of apparent calm, and even a seemingly marginal scene in which we see Rosario hammering copper nails into a tree to kill it plays on several levels. It’s also good at details – like the way bilingual couples switch languages when talking to each other, according to whether they’re trading orders, threats, irony or sweet nothings.

The three male actors at the centre of the story are all equally strong, and if Kohler is less impressive it’s only because her role is perhaps the film’s least satisfying: it’s difficult to believe that such an obviously smart woman would be so uncurious about her husband’s past, or so unfazed by the fact that he has never once returned to Italy. Moodily shot in grey winter light, A Quiet Life also features a tasty ambient soundtrack by Teho Teardo that is ready for the CD, but never distractingly obtrusive.