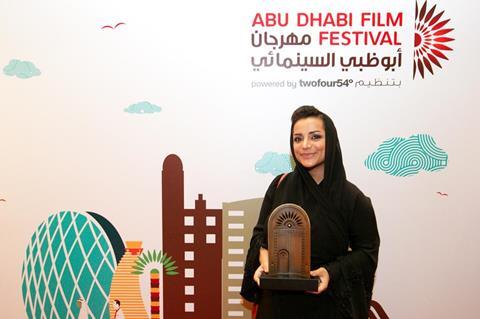 At a ceremony in Abu Dhabi’s Emirates Palace, where the festival is based, the top award in the short narrative competition went to Shahad Ameen’s Eye & Mermaid, which also won best cinematography.

The 14-minute film centres on 10-year-old Hanan, who lives in a fishing village on the coast of the Arabian Peninsula and tries to discover the origin of the black pearls that her father brings back from his nighttime fishing trips.

The Best Emirati Film award went to Nayla Al Khaja’s The Neighbour, an 18-minute film about a woman who moves to Dubai to make a fresh start and befriends an elderly neighbour

The award for Best Script went to Cholo, while the first award for the short documentary competition went to Marwan The Boxer.

The New York Film Academy Abu Dhabi Aspiring Film Maker Award went to Hidden Songs of the Past and Youssef.

The best international narrative short went to The Man with a Dog; the best documentary to Love in the Time of March Madness; and the best animated short film to Me + Her.

Best Documentary:
LOVE IN THE TIME OF MARCH MADNESS
directed by Melissa Johnson and Robertino Zambrano.