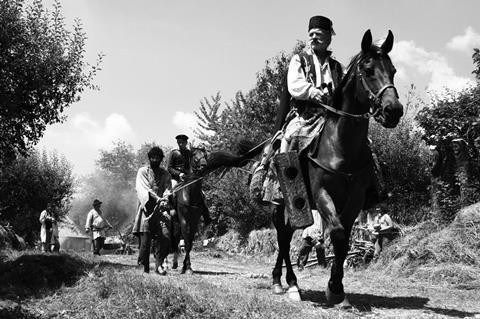 Radu Jude’s third feature Aferim!, which marks a departure on almost every level from his first two films, is set in the Wallachian region of Romania in feudal 1835 and is an unambigious, resonating critique of the country’s shameful treatment of its Roma minority.

Aferim! is almost over by the time we get an intimate look at Constantin’s face. The surprise is that he’s unremarkable, timeless, even – much like the persecution he represents.

Aferim! translates to “Bravo!”, a term used to express acclaim: its deeply-felt irony stings throughout a starkly black-and-white road trip undertaken by a constable and his son who have been paid to return a runaway Roma slave to his brutal master.

Aferim! is stylish, full of nuance and commentary; set up as a Western with a hard-scrabble journey on horseback through an almost-forgotten time and place. The art feeds naturally into the piece, though, and the attractive atmospherics, vistas and unusual sets are dressing on a stark tale of cruel, institutionalised slavery.

Critical notices should be strong and may help the film into small commercial exposure, although it will struggle to attract wider audiences (much the same as  12 Years A Slave). Radu keeps his camera at deliberate distance from the faces of all his characters, however, making this more of an intellectual than visceral prospect, for those who like their Romanian New Wave, or Nuri Bilge Ceylan’s Once Upon A Time In Anatolia. Sold worldwide by Beta Cinema after a Berlinale world premiere, Aferim! is undoubtedly set for natural festival play, where it should open debate.

Opening credits, over a black and white shot of a cactus, set the scene for this visually appealing, almost mythical, medieval Western – it’s hard not to think of Don Quixote. The affable, yet vilely racist constable Constantin (Corban), decked out in military garb, sets out with his son Ionita (Comansiou) to find the escaped slave Carfin (Toma). He is in the pay of the feudal lord (boyer) Lordache (Dabija). Gypsy slavery is a way of life (dating back to the 1300s, prior to the establishment of Wallachia, and abolished in the 1850s), and the Church is also implicated in their abuse and maltreatment.

“Are gypsies people or devil’s spawn?” wonders Constantin, idly, calling them “crows” and happy to wade into their craven masses with a horse and lash, even when he is outnumbered. “The butcher doesn’t fear thousands of sheep,” he explains. Wallachia is not a place with respect for the weak, and women are also treated with universal contempt. A travelling priest enlightens Constantin and Ionita with a monologue of almost amusing, relentless invective against the Jews and Roma.

Once Carfin is captured, Jude, working from his own screenplay with Florin Lazarescu, starts to push back on the captors’ conscience. Arriving at a country fair, they witness desperate Roma begging to be bought: “Buy us - save us from hunger!” cries one. They hear how a wife traded 30 gypsies for a carriage as part of her dowry. According to the credits, much of what is onscreen is drawn from historical documents.

Although he is initially unlikeable, and almost never seen in close-up, Constantin proves to be not the worst companion for this journey through a medieval mind and mindset.  He has a conscience, even though it is deeply hidden. He knows returning the slave will result in dire consequences at the hand of a brutal, preening master and the return begins to prey on his mind.

Constantin asks his son whether “a hundred years from now, folks will say a good word for us, say we smoothed the way for them”. The horrific fact, of course, is that while Wallachia may have outlawed slavery since the events of this film, the persecution of the Roma has endured, to the death camps of Europe and on to the present day. Aferim! indeed.

Through keeping the camera mostly at a distance, with the viewer observing and hearing rather being fed emotional cues, Radu invites an intellectual judgment. Aferim! is almost over by the time we get an intimate look at Constantin’s face. The surprise is that he’s unremarkable, timeless, even – much like the persecution he represents.